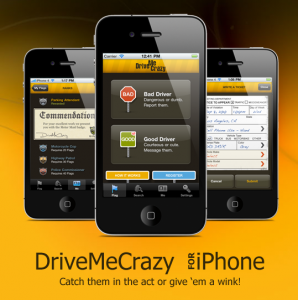 Do you get road rage while driving because the drivers around you simply are bad drivers? Is the car in front of you violating a number of traffic or safety laws and you wish that there was a nearby police offer who would ticket the gas guzzling, SUV pedaling maniac? Well, DriveMeCrazy, developed by the same people who made Shazam, the music ID software, will allow iOS users to report traffic violators or flirt with attractive motorists, though if you’re caught violating traffic rules while operating the app to use the latter feature you may as well get reported by other cohorts on road.

Basically, the app allows you to speak the license plate and tag the person as a good driver or bad driver, and issue them a commendation or citation. Best part? Once shamed by their bad driving, the offender can look up their record on DriveMeCrazy.

The vision behind the app is to reduce the number of traffic accidents, deaths, and injuries by creating a reputation management system.

Our vision is to dramatically reduce the number of accidents caused by unsafe or aggressive driving. DriveMeCrazy™ empowers anyone to report bad driving behavior by fellow motorists. We are a reputation management system similar to those already successfully deployed on the Internet such as eBay’s Buyer/Selling ratings. Our service will give drivers the feeling of being surrounded by unmarked patrol vehicles, and we expect to see a significant reduction in accidents as was found with the “How’s My Driving” programs for trucks. We are not big brother, but merely an open forum and database that logs what individuals already observe on the road and complain about daily. DriveMeCrazy is for motorists what Yelp is for restaurants or TripAdvisor for hotels.

You can learn more about the company’s vision and hopes that shaming bad motorists will help accomplish from their website.