Getting food and groceries delivered right to your door is nothing new, even for users ordering from a mobile device, but what if you could do the same when it came to alcohol? A new start-up called Drizly aims to do exactly that and be the Amazon Prime Air of booze.

It’s called Drizly and they’ve been operating in Boston since May of last year, but starting today they’ve just kicked off their booze delivery service in New York City according to Recode. After receiving over $2 million in seed investment the company is now aiming to compete with Amazon Prime and Google Shopping Express, but deliver beer and wine directly to your door, usually in under 60 minutes. 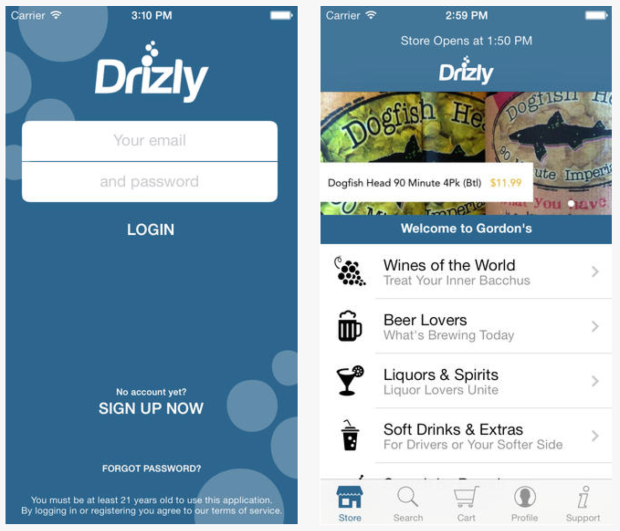 The entire concept was conceived by three college friends, which makes sense, thinking of ways in which they could get booze delivered right to their dorm. Fast forward to today and they now have a fully functioning system and mobile app in place (iOS only for now) that will get beer, wine, and liquor delivered as quickly as possibly.

Drizly doesn’t have a state liquor license, and they aren’t providing the beverages themselves. Instead, they’ve partnered with over 26 different liquor stores in New York City, and will simply connect buyers with nearby locations. You can search for specific beer, wine, and liquor types and the nearest location will receive the order, and deliver it right to your front door.

As a result, buyers won’t need to look for a nearby store that actually delivers, then hope they have what they’re looking for. Drizly does everything for you, finds the nearest location, and simply delivers drinks so you can enjoy the game from your couch without ever leaving the house. Essentially Drizly is a booze aggregator, will take your order, then issue it down to a nearby partnering store for deliver. Neat right?

Currently Drizly is operating in Boston with 16 stores on board, and as of today launched in NYC with another 26 operators all standing by to deliver a 12 pack of beer or fresh bottle of Makers Mark right to your door in under 60 minutes. Get the app today from the App Store and give it a try.