We’re not exactly sure why Motorola and Verizon continue to be mum on an official release date for the Motorola Droid Bionic especially when a video teaser essentially confirmed the release date and Big Red is currently holding a contest for its first dual-core 4G LTE smartphone. Sadly, they’ll also probably remain silent today even after a new photo surfaced showing off a Droid Bionic store demo unit meant for the upcoming launch.

What you see here is, very plainly, a Droid Bionic poking its head out from a box that has arrived at a store somewhere in the United States. Yes, the phone is officially arriving which means that the September 8th launch date is probably a pretty safe bet. 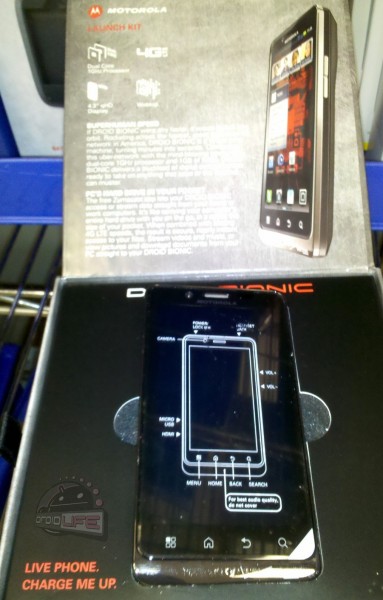 So, we have marketing materials, we have demo units, we even have a phone that is ready to be rooted but we still don’t have a pre-order or a release date or any sort of official pricing.

Makes about as much sense as the Droid Bionic being announced at CES 2011 and being released 9 months later.