Droid Does... Not Get a Signal Here 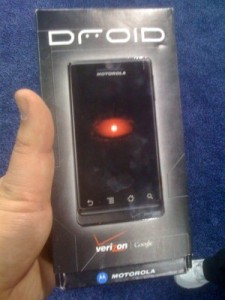 I’ve said it once, I can’t say it enough: whether a particular wireless phone service works for you depends greatly on your geographical location. I don’t care if AT&T is the fastest, or if Verizon Wireless has the widest coverage. What I care about is whether a particular service works where I live. Yet, sucker that I am, I assumed that Verizon Wireless with their fantastic coverage would simply work in my house. It does not. As a result, my new Droid does not work for me. Here’s what happened.

My wife Tanya wanted to run out for a few errands today, so I took the opportunity to pop into my local Verizon Wireless store to get my new Droid activated. No problems there. In-store activation was a snap. I signed up for month-to-month, fewest minutes possible, with the intention of using it to replace my wife’s phone (we make very few calls).

Tanya previously had not wanted data on her phone, but just this week, her office locked down on Internet usage, keeping her out of her personal email and websites. Thus, it’s a good time for her to get email, web, and Pandora on her phone. Plus, now she won’t be asking for my iPhone every time she wants to take a photo of the cats (though she probably still will).

So that was all fine and dandy. But after I got home and started finishing setup with other services, specifically Google Voice, I found I wasn’t getting a signal in my basement. Didn’t concern me too much. My iPhone gets a 3G signal in my basement, but it’s inconsistent and drops completely in certain spots. No big deal for the Droid, I thought, I’ll just move upstairs to finish. But to my surprise, that didn’t work either.

After some experimentation, I found my Droid would get a signal on the top floor… near a window. Even standing outside, on ground level, resulted in a weak signal and, yes, I did drop a call. Apparently, the mighty Verizon Wireless network has trouble piercing the shroud of trees that surrounds my house, same as I’ve found with the Sprint network (whose HQ is only a mile away). Possibly that’s a CDMA limitation; I’ll have to look into it.

Anyway, despite that limitation, the Droid is not an automatic FAIL for us. My wife prefers to use the home phone for calls, her Google Voice number is set to ring both home and mobile, and we have wifi for data at home. The real test will be whether it works for her at the office, where we want her wireless data to work. Shouldn’t be any problems there, but I wasn’t expecting any problems at home either, so we’ll see.

Regardless, it looks like I’m not going to be switching from AT&T anytime soon. Unlike my wife, I prefer to use my mobile phone for calls and have used it for backup when the power has gone out, taking the home broadband with it. Again, wireless coverage maps and download speed tests are fine for showing off, but they don’t tell me if I’m covered where I live. Xavier’s got T-Mobile antennas going up where he lives. I’ve got AT&T 3G in my basement. Go with what works for you.