The Droid Incredible 4G LTE is a well deserved update to one of the best known Droid lines, and HTC wisely chose to resist the push for larger display and ship a 4-inch 4G LTE smartphone that keeps the same narrow Droid Incredible look users have come to love.

The Droid Incredible 4G LTE doesn’t boast the fastest processor or the highest resolution display, but it does deliver a small great looking package with fast 4G LTE and Beats Audio.

The Droid Incredible 4G LTE is available for $149 from Verizon and includes a 4-inch qHD display, 1.2GHz Snapdragon processor, 1GB RAM and 8GB of memory, with a Micro SD card for more memory.

Watch my hands on with the Droid Incredible 4G LTE video below which shows off the size and the design of this small phone. 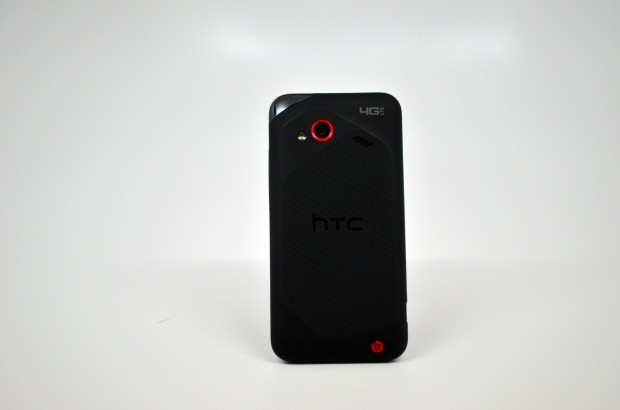 The Droid Incredible 4G LTE back looks similar to the previous generation.

HTC switches to a grippier rubber finish that feels nicer than the smooth plastic of previous models. The now familiar red camera ring also spices up the back of the phone, matching the red Beats Audio logo in the lower right corner.

The left side of the phone sports a Micro USB charging port and the right includes slim volume buttons. A red power button sits on the top of the phone near the headphone jack.

I’ve always enjoyed the looks of the Droid Incredible phones, and the Incredible 4G LTE doesn’t change that. The phone is slightly thicker than the iPhone 4S and Samsung Galaxy S III, but thick enough to bother most users.

The Incredible 4G LTE has a 4-inch qHD display is not as crisp looking as the iPhone 4S or Samsung Galaxy S III, both of which sport higher resolution displays. 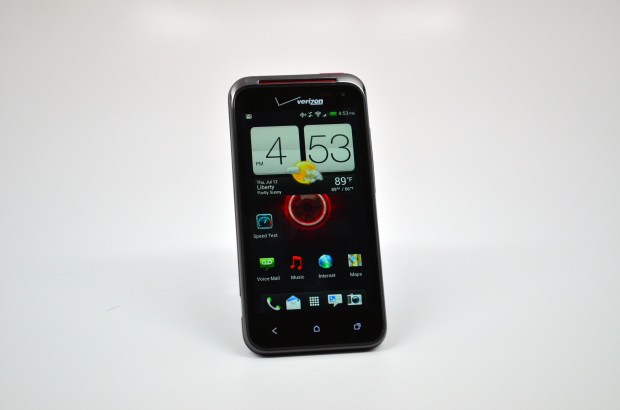 Many Android smartphones boast at least a 720P HD display, which is great for watching movies and TC shows on the device, as well as showing more content on the screen at once.

I prefer a higher resolution display, but this is not a deal breaker for every user. 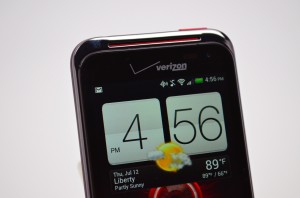 The Droid Incredible 4G LTE runs Android 4.0 Ice Cream Sandwich with the same three buttons we’ve come to expect. The HTC Sense interface covers up much of the tron-like ICS looks, but doesn’t slow down the phone much.

Performance seems snappy so far, with only a few lags inside the Google Play app. Switching between apps is fast, possibly one of the fastest I’ve experienced. Normally Android’s multitasking menu is sluggish to load, but on the Incredible 4G LTE it’s there in a snap.

There is a lot of pre-loaded Verizon software like game trials and links to Slingbox. These apps can be disabled, but not uninstalled.

The included Beats Audio feature is nice, though it made the bass too heavy on several songs.