Exif image data reveals that Motorola and Verizon Wireless may be adding yet another member to the Droid family to join the recently available Droid RAZR by Motorola. The Exif image data shows the RAZR MAX name used, but it’s still unclear what specs or appearance the Droid RAZR Max will take. 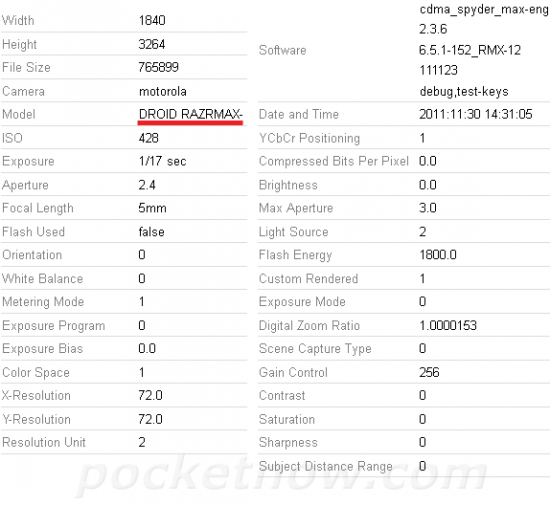 Some are speculating that the Droid RAZR Max would be slightly thicker than the Droid RAZR to accommodate a slightly larger battery, giving the device longer periods of time between recharge. This is important as the Droid RAZR comes with a non-user-replaceable battery meaning that users can’t swap out depleted batteries with new ones while on the go.

Another possibility would be a RAZR with a 720p HD display or one with beefier specs. The recent RAZR variants headed to China contain better specs than those released for the U.S. and other international markets so a revised Droid RAZR Max may adopt those improved specs.

Whatever the case may be, it seems that Android devices on Verizon are having shorter life spans with subsequent successors being released shortly after a device is released. For example, the Droid Bionic was quickly succeeded by the RAZR.