So, after finding out that the Motorola Droid Bionic’s price has indeed dropped to $250 at Verizon, I decided to take a little gander over to Verizon’s Droid RAZR page. Remember, it’s up for pre-order today. And what I found shocked me. It appears that the pre-orders have already sold out through Big Red’s store as right below the pricing, in bright red, is a little note that reads: “This item is temporarily out of stock.”

This of course comes mere hours after the phone went on sale. So either this thing is selling like crazy, I’d imagine more than a few HTC ThunderBolt owners are paying their ETF’s today and snagging this, or this is Verizon trying to drum up a little attention.

Neither would surprise me. 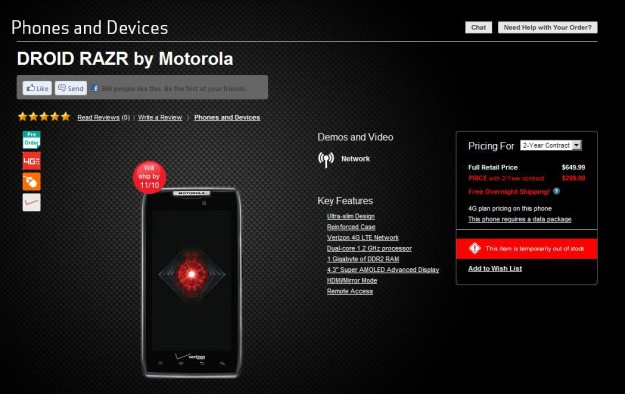 This is a fantastic phone, we told you so already, and if you’re not into the Galaxy Nexus, this is definitely a phone that you’re going to want to take a long look at.

Still, it’s a little odd that it’s already sold out and carriers are not beyond lying to the public for gain.

Was anyone able to order one today?

Update: Best Buy has launched pre-orders as well so if you can’t see it through Verizon, you can find it there.