Most news reports on the flood damage in Houston don’t do a great job of showing how widespread the damage is in the wake of Hurricane Harvey. Some journalists and Houston residents are taking to the air to give those outside the flooded city a better perspective of the damage. Some of the videos are shot in areas that aren’t typically covered by mainstream media, which tend to focus on landmarks and the worst hit areas.

While aerial coverage is nothing new, most broadcast networks use helicopters that have to fly hundreds of feet in the air. Drones can fly several hundred feet in the air as well, but they can also fly low enough to fly between buildings and show how people are working to save each other. Drones are also relatively affordable, ranging from a few hundred dollars for a drone like the DJI Spark, to a few thousand dollars for professional-grade drones like the DJI Inspire 2.

The above video was shot on Sunday, August 27 by NBC News. It shows Houston several residents wading in waist-deep water and moving about in rafts. It appears that the drone is flying about twelve feet above ground, making the residents’ faces visible.

Adam Rayburn uploaded the above drone video show the above video of what a neighborhood in southeast Houston looks like as of August 27, 2017. His drone moves around the neighborhood at about 100-feet above ground level. The video shows floodwaters covering roads in every direction, making them impassable. The only person visible navigating one of the roads is in a canoe.

Marco Luzuriaga uploaded the above video of the flood damage near Brays Bayou in Houston Texas. The video shows water overrunning Cahloun Bridge, submerged automobiles, and block after block of impassable roads. The drone video tracks a truck trying to pass through floodwaters in a low-level shot. The video ends as it begins raining again as doing so is a sure-fire way of ruining a drone.

Adrienne Elle uploaded a video tour of her Houston neighborhood she shot with her DJI Mavic Pro drone. In the video she said she wanted to see if there were any clear roads that could get her to a nearby grocery store, but driving in these conditions is clearly impossible.

Youtuber Mikey8567 uploaded a drone video of the flood damage from his hotel near Interstate 45. According to the video description, guests at the hotel are unable to leave. The drone video shows vehicles struggling to drive on the highway. 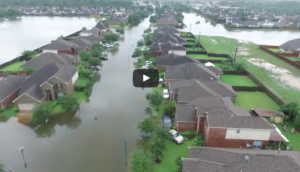