Remember the Dropbox outage that occurred on Friday evening? The one that hackers tried to take credit for, but then were forced to recant after Dropbox denied any hacking was involved? Well, it appears that some users are still experiencing some issues with Dropbox more than 48 hours after the internal service that was being performed that caused the Dropbox service to go down in the first place. According to Dropbox, here is the latest: 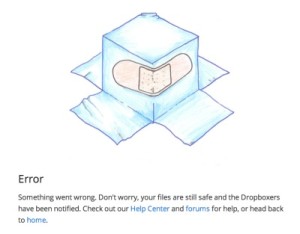 As of this morning at 4:10am PT, nearly all users (over 99%) can access their files on dropbox.com. The Photos tab is still turned off, but you can access your photos via the Files tab on dropbox.com or the desktop client. We’re continuing to make a lot of progress restoring full service to all users, and are doing so in careful steps.

About 5% of our users are still experiencing problems syncing from the desktop client, and about 20% of users are having issues accessing Dropbox through our mobile apps. Within a few hours, we’ll be rolling out a change that will further improve things for those users. We’ll give an update after that.

Your files have been safe this entire time. Thanks again for your patience.

For what it is worth, I’ve experienced no issues personally after Dropbox announced it was back online Saturday, but I’m sure that offers no solace to those who may still have syncing issues. Dropbox says it is working with individual customers who are having issues to try and resolve them as quickly as possible ahead of the fix that this promised.