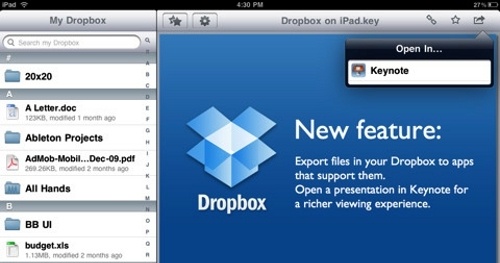 We mobile users are an impatient lot and I think that’s part of the psychology. Being mobile we want everything now or sooner. Quite a few DropBox users have been very impatient waiting for that popular free cloud service to update its app for the iPad, and well, they just did.

The DropBox App for the iPad now takes advantage of the larger screen but perhaps more importantly allows you to open and edit docs in Apps on the iPad. The two way street that would return an edited app to your DropBox still isn’t there yet. But at least it is giving those who want to create documents a chance to do some work on the iPad. Meanwhile impatient mobile users are hoping this gets taken care of with the 4.0 OS release this fall.