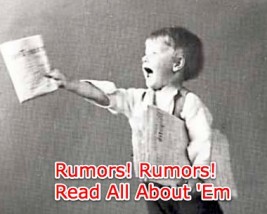 I’ve been saying for quite some time now that in the great Tablet race there isn’t much going to separate one Tablet from another when it comes to hardware. (It’s all about the software/hardware optimization in my view.) Sure there will be some small sprints as to who has the faster processor, and who has 4G coverage, and it was oh, so obvious, who is going to have the highest resolution screen.

But that doesn’t mean the Tablet makers don’t compete on other fronts. Lately its been on the legal front between Apple and Samsung. Now it looks like those two are starting to compete in rumor land as well. This time about those high resolution displays. Adam already linked to a BGR post telling us that Samsung is looking to race ahead of Apple by having a higher than high res screen ready come February, apparently with a resolution of 2560 x 1600.

There’s also word out (breathlessly within a few short ticks of the clock) that Apple’s iPad 3 will indeed have a Retina Display, with an announcement around February. This one comes from an analyst at Citi. (Don’t get me started on analysts.)

Who really knows where these rumors start. There’s obviously speculation that they come from inside sources in a continual game of one-ups-manship. And of course all of the blogs will follow every nuance about both rumors until we’re all blue in the face. But since we all know there isn’t any real competitive advantage available on the hardware front, we might as well compete with rumors.

Let’s see a show of hands here. Does anyone who even remotely follows the Tablet race not expect both Samsung and Apple to compete with higher res displays next spring? Anyone? Really? I didn’t think so.

Increasingly I find it amusing, especially in the context that I began this post with. There’s very little to differentiate these slates and what they can do when it comes to the stuff that makes up the hardware. And you can bet that whoever plants a new flag first with a new display or a new chip or a new whatever, won’t stay in the lead for long.

Maybe that’s why we have all of this money being invested in lawyers.