A new EA Sport UFC gameplay video shows Jose Aldo and Anthony Pettis facing off in the Octagon with in-game footage of the MMA fighter that arrives this summer. This new UFC gameplay video is likely from the Xbox One or the PS4, but the video doesn’t show which system it is running on.

After a three-minute introduction by the announcer, the actual UFC gameplay kicks off with a flurry of kicks, punches, elbows and grapples. This isn’t the first EA Sports UFC game play video, but it is one of the first times we get to see two fighters go at it in a real match instead of cinematic style footage.

While a lot of attention is still focused on Watch Dogs, EA makes a case for gamers to pay attention to this new UFC game. The six-minute video below shows players realistically fighting in the trademark UFC Octagon.

Although this latest EA Sports UFC gameplay video lasts six minutes the last three shows the only real fighting. The kicks, punches, elbows and grapples look smooth and realistic and show what gamers can expect when the fighting starts. Pay attention to the character identifiers in the upper corners. These show where an opponent is weakest as the fight progresses. In this video Pettis’ head is highlighted in red after just minutes into the match, letting Aldo know where to focus his attacks.

As the fight progresses a Aldo breaks the skin on Pettis’ head and blows start top throw blood on the mat. It’s tough to see due to the position of his face during the fight, but as it comes to a close we can see an inflamed nose and head that shows signs of the beating that was delivered. 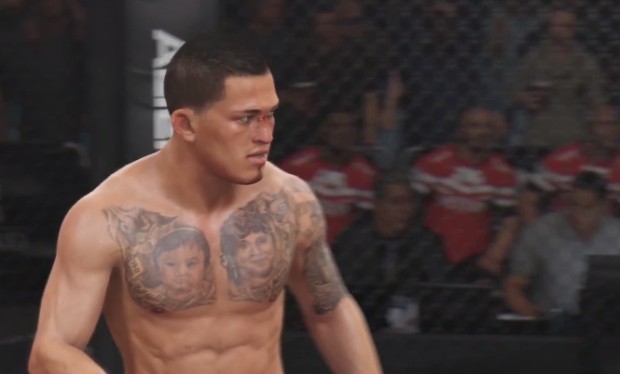 When the fighters go to the mat late in the video, the back and forth grapple and struggle for control looks much more realistic than in wresting and fighting games from years past. EA focused on delivering strategic submission battles with the ability to fight through an on the matt submission attempt to escape and take control.

As Creative Director Brian Haynes explained in an earlier gameplay video, “We wanted EA Sports UFC fighting engine to show off the same fluidity you’d see in a real fight.” Watch the video below to see how the small details that EA Sports paid attention to in order to create a more realistic experience.

Small details include the Octagon bouncing as fighters step on it and flesh and muscle reacting to a submission move that strains limbs and constricts circulation. Gamers will also be excited to know that the game includes moves that can turn the tide of a game with one well placed blow.

In order to make full use of the Xbox One and PS4 power the UFC fighting engine created by EA includes 3D head and body scans for life-like looks, real life tendencies and more. Fighters can also pull off moves using the Octagon for a roundhouse kick or a superman punch.

The EA Sports UFC release is scheduled for June 17th on the Xbox One and PS4. The game is only available on the new consoles, which may play a role in the fighting engine and graphics shown in these videos. EA Sports includes Bruce Lee as a playable character that is unlock-able through a pre-order.