Today, there are thousands, maybe millions of people all heading out to retail stores to pick up a copy of The Division. What many of them likely don’t know is that buying The Division on Microsoft’s Xbox One console gets them access to downloadable content weeks before it’s available on Sony’s PS4. The game’s publisher is ready to clarify what content will be available on which platforms when.

Ubisoft reiterated the Xbox One early release details for The Division’s add-on content yesterday on the UbiBlog. It also confirmed what will and won’t be part of the deal it made with Xbox One maker Microsoft. 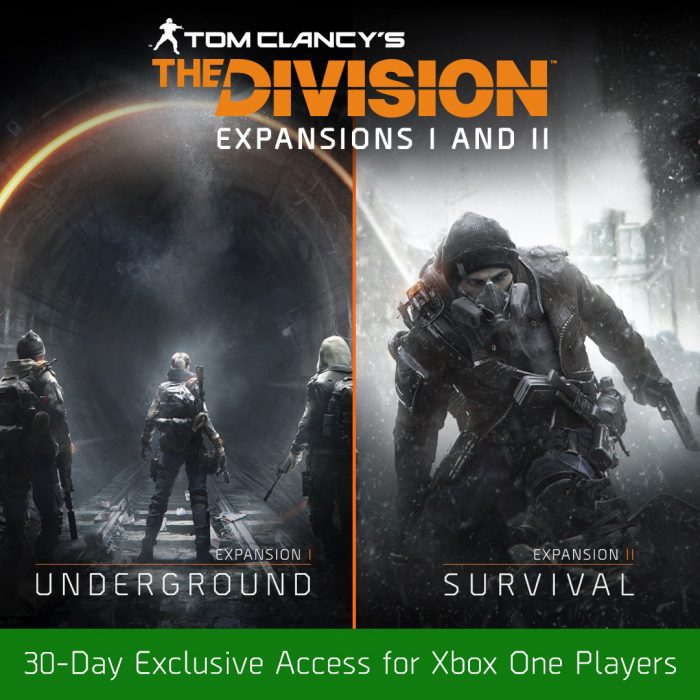 The Division is a role-playing game making its début this week on Xbox One, PS4 and Windows PCs. In The Division, an unstoppable virus has ravaged New York City. After an attempt at containing the outbreak, the United States military pulls out entirely, leaving those who aren’t infected to die at the hands of dangerous factions roaming the streets. Players create an agent to assist in saving the broken city.

Ubisoft said earlier this year that add-on content would come to the Xbox One version of the game first, but left many questions unanswered. First, it was unclear if the free content updates that the company plans to deliver over the next year were also part of the exclusivity window. Second, the studio didn’t make it clear how long the exclusivity window for Xbox One was.

Microsoft is hoping that offering early access to the game’s content will give console upgraders enough incentive to buy an Xbox One instead of a PS4 for the game. It’s also why only the Xbox One comes bundled with a copy of The Division.

It turns out that the early access only pertains to what Ubisoft describes as major expansions. The first two, Underground and Survival will arrive on the Xbox One a full 30 days before they arrive on other platforms. Though certainly big enough to warrant a closer look, 30 days isn’t too bad considering content for Destiny, another game in the same genre with an early access agreement, took a year to arrive on Xbox One after launching on Sony’s PS4.

What’s more, Microsoft and Ubisoft don’t have plans to hold up the game’s final first year expansion, The Last Stand. Ubisoft’s post confirms that The Last Stand isn’t a part of the 30 day agreement. Unless something changes in between today and its launch, this expansion will arrive on Xbox One and PS4 on the same day.

The smaller updates that’ll add new content to The Division aren’t covered by the 30-Day early access agreement. This means that all users will be able to enjoy the steady stream of updates that Ubisoft has planned at the same time.

The first smaller update will add Incursions so that players who’ve reached the end of the game will have a way to earn rare player add-ons with their friends. The second update, called Conflict will add new things to the Dark Zone and introduce a Columbus Circle Incursion that isn’t included with the first update. The smaller updates are free too, which is also great news for players.

All told, these details on early access content for The Division don’t seem too bad for anyone involved. Microsoft gets a legitimate way to promote the Xbox One and players of other versions of the game don’t have to wait too long to get content that they’ve already paid for access to with The Division Season Pass.

Ubisoft hasn’t said how much each of The Division expansions will cost. Users can purchase The Division Season Pass and get access to all three major upgrades for $39.99. The Division is on store shelves now for $59.99 without the Season Pass included.