EA’s Origin Store has now confirmed what many gamers had hoped for. It appears Titanfall, the upcoming Xbox and Windows exclusive shooter that allows users to team up with giant robots, will get a beta release before it launches to the public on March 11th.

Confirmation of the Titanfall beta came just moments ago when Electronic Arts’ Origin Store website was updated to include the message about the beta release. That message read “The beta is coming. Prepare for battle.” Unfortunately, the message has since been removed, and Titanfall’s previous pre-order page has returned to the Origin Store. 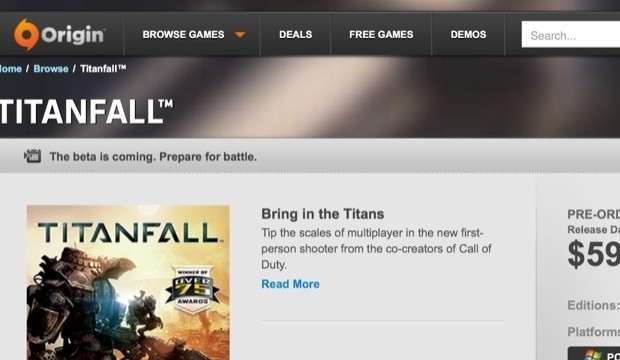 While the confirmation could have been simply a mistake involving placeholder information, it’s more likely that someone at EA simply updated the page too early. After all, Electronic Arts is publishing the title so it isn’t as if a third-party who wasn’t involved in the game accidentally leaked information that they may not have necessarily had. If anyone would know about a coming Titanfall beta it would be EA.

Titanfall was already in the hands of some dedicated users. Respawn Entertainment shared an alpha version of the game with trusted users earlier this month. It used that release to gather networking and server information.

Users who made it into the alpha test didn’t receive final copies of the game. Instead, they were only treated to some of the game’s basic mechanics and graphics. Respawn indicated that leaked videos from the alpha release only showcased 25% of the game’s final capabilities.

Excitement for Titanfall is high. Though it’ll also make its way to the Xbox 360, the game will launch as one of the first truly next generation titles for the Xbox One. The title even uses Xbox Live’s Compute service to offload character interactions to Microsoft’s servers. In theory, that makes the game world each user experiences unique.

Unfortunately, today’s leak didn’t divulge a launch date for the beta. As such, there’s no way to know when the Titanfall beta might begin. However, it’s reasonable to assume that a beta for Titanfall would need to be announced soon. The game arrives on store shelves and the Xbox Games Store on March 11th. Logically that leaves Respawn with just February for any possible beta release.