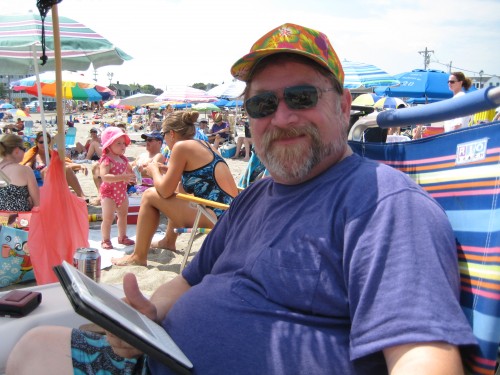 My lovely wife and I took a much needed few days off and headed to visit family at York Beach, Maine earlier this week. We only had a couple of days to relax and even though we’re both up to our ears in work, we decided not to take any computers along with us. Well, that’s not completely true. I took along the iPad, but I swore I’d do no work, just some play. I also took along the Amazon Kindle as the family ritual at York Beach is to spend the entire day on the beach when possible.

Reams have been written about how the Kindle (and other eInk devices) are better for reading in bright sunlight than the iPad is, and that’s absolutely true. I lugged my Kindle 2 down to the beach and spent a good portion of both days doing some reading. Back at the home place, there’s a great hammock that rests in the shade pretty much all day, and I pulled out the iPad to give that a try using the Kindle App. No problem reading in the shade, but when you’ve got three nephews bouncing around I felt safer using the Kindle than I did the iPad.

That’s a story that proved accurate a few hours after the picture below was snapped. My sister-in-law has an iPhone 3GS and of course she has a few apps on it to entertain her sons. One of those apps is one of the picture morphing genre (take a picture, make someone look different by touching and morphing the picture) and the nephews started fighting over it when the iPhone took a dive for the floor and popped open, rendering it useless. She took a trip to the closest Apple store and got it working for a short time, then it stopped working again. So, as we headed back home, she headed for another trip to the Apple Store. The moral of that story is, well, I bet you can figure it out if you have kids and fragile gadgets.

Anyway, I was more than satisfied with my reading experiences on both devices under different circumstances, and even more satisfied that I didn’t have to put either device on a charger the entire duration of the short trip.

If you’re interested there are more pictures of the trip here. 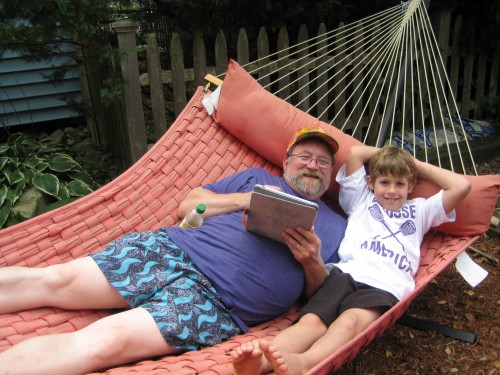