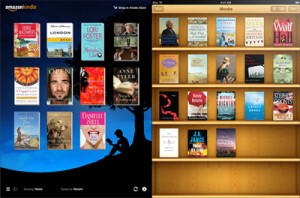 If you were paying attention awhile back, Apple made it pretty plain that they wanted a piece of your pie if you allowed purchases in your Application to link externally through a web page. At the time Apple served notice, many wondered what would happen for eBook reading Apps like the Kindle, Nook, Google Books, etc…

Well, last week it looks like Apple might have started to drop the hammer. Google Books disappeared from the App store and reports are saying that the Wall St. Journal, Kobo, and other Apps that link externally are changing things up to comply. Let’s be clear here, there’s no official word on why the Google Books App was pulled, so most of this is surmising based on what others are hearing. But, like I said, Apple’s been pretty clear about this for some time.

There are also some sketchy reports out there. John Biggs on TechCrunch says that iOS Kindle App users can’t make purchases any more, but I think he’s saying that existing account users still can, but the prose is a bit tortured. Well, I just did. So, while changes may still be forthcoming Kindle App users appear to be still in the clear.

Two thoughts on all of this.

First, it’s Apple’s App Store, they can set the rules whether we like it or not. To play the game you have to play by Apple’s rules. If enough folks don’t like it, then consumers will have the final say.

Second, it’s a crying shame that these companies can’t work together to figure out an answer to a very complex set of issues, but it is an early game right now and everyone is maneuvering to control as much of it as they can. Competition is at the root of this, but we’re watching the ugly part of that potentially play out right now, before things settle down and market forces have their say in the matter.  Apple is an 800 pound gorillas in this completely crushing the cat bird seat and will stay there until someone (Amazon?) mounts a serious challenge in the Tablet market.

UPDATE: Just a few minutes ago I noticed the Kindle App for iOS had an update that removes the Kindle Store button. Wonder what happens if you don’t update the App? The description says: