Somehow, my colleague found Performance Test 6.1 benchmark testing software loaded on an Eee PC 901, with Windows XP and Intel 1.6GHz Atom processor (1GB RAM) on display in a booth at Computex.  So we decided to take the few minutes to run it and record the results. (Never mind that two of us had to block and tackle the booth personnel from seeing what my colleague was doing.)

The overall score was 159. Not surprisingly, the Eee PC 901 model has a performance benchmark score nearly equivalent to the xTablet T8400 Tablet PC, a Pentium III M 933MHz (640MB RAM) Tablet PC my company used to sell two generations ago which has a score of 146. 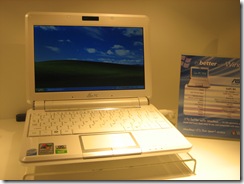 What does this mean?  That the Ultra Portables with Intel Atom processors will be a huge success in many markets.  They will also be seen by the business world as an attractively priced alternative to more expensive notebooks.  However, these models will not have the performance necessary to run many of today’s line of business applications critical to field workforces.  The systems providers that sell to vertical markets – such as MobileDemand and many others – will have a job to do to convey the message that these new Ultra Portables will not provide the necessary horsepower for their needs – and in many cases the durability for them to survive even a few weeks or months.

A case in point on the horsepower:  My company has sold thousands of our rugged Tablet PCs to field beverage sales markets (beer sales).  Their selling software used to run effectively on the xTablet T8400 model with the performance benchmark score of 146.  We are hearing reports that the their latest selling software will no longer run effectively on this hardware model that had been deployed 3-4 years ago.  It simply runs too slowly to be of use.  Lucky for us that the xTablet T8400 model is two generations old.  Our current xTablet T8700 has an Intel Core Duo architecture, a performance benchmark score of 296, and will run the selling software very well.  It’s time for these customers to upgrade to the latest hardware architecture and the software is pushing this.  It’s not because the hardware is failing, it’s because the software has grown in complexity and features that necessitate MORE system performance.

Of course, businesses usually test any given system before they purchase – and it would be HIGHLY recommended they do so before considering buying these attractively priced Ultra Portables.