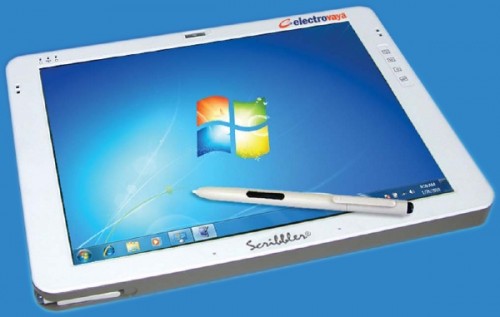 On the forum, Steve S shares with us word (from digitaldoctors at TabletPCBuzz) that Electrovaya has listed a new Scribbler Tablet PC, the first upgrade in nearly two years. The Electrovaya Scribbler SC4100 sports the same slate form factor as the past couple iterations, but not only updates the processor (Intel Core 2 Duo L7400 1.5GHz), it also adds touch input to the mix.

Digitizer is listed as “Wacom® Digitizer and Touch”, presumably the duo-mode solution offered by Wacom, but no mention of multi-touch. Sadly, the rest of the specs are little changed since the SC4000, including the 12.1″ 1024 x 768 screen. Worse yet, Electrovaya seems to have abandoned their ultra-capacity Super Lithium Polymer batteries, using a mere 45 Whr battery instead, and the starting price is $2089. Having owned a Scribbler as my first tablet, I have a soft spot for the line, but without the super-battery, the current appeal is limited.