The iPad Mini 3 and iPhone 6 rumors offer hope for exciting new Apple products in 2014 and two new concepts from the man who made iPhone concepts exciting offer a look at what the current rumors suggest is on the way.

iPhone 6 rumors tell us Apple is working on a new design for 2014 with curved edges and a larger screen. There are no shortage of new iPhone 6 rumors as release date details, parts, photos and even iPhone 6 videos arrive almost daily.

iPad Mini 3 rumors are not as frequent, but we do expect a new iPad Mini Retina for 2014 with the same high-resolution screen as the current model, but with Touch ID and possibly a new design. 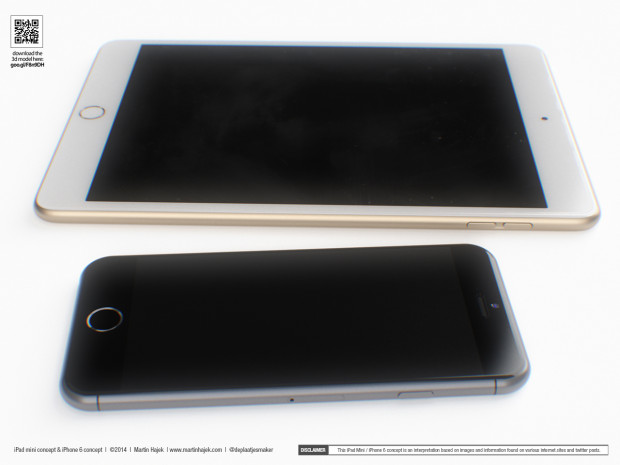 Check out these new iPad Mini 3 and iPhone 6 concepts.

In this collection of iPhone 6 concepts Hajek adds some spin to the leaked iPhone 6 mock ups and schematics to show a look that is new, but still true to the iPhone look we know. 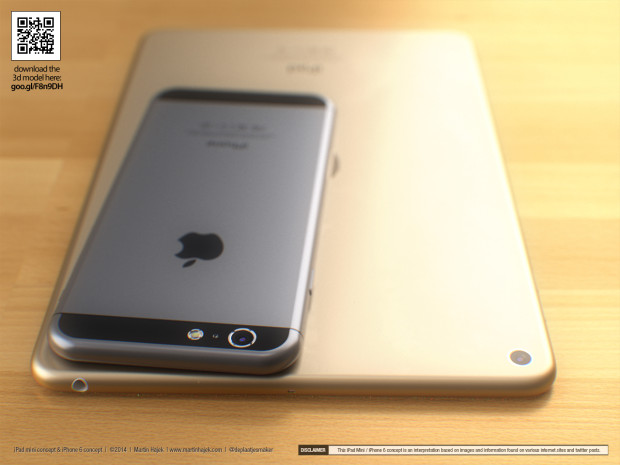 An iPhone 6 concept sits atop a gold iPad Mini 3 concept.

Instead of ugly lines along the back of the iPhone 6, Hajek shows a second color of aluminum or possibly glass. iPhone 6 rumors suggest the black lines are not final, and Hajek’s iPhone 6 concept imagines a much nicer look for the final design.

Another update we see here is a circular dual-LED flash. The iPhone 6 mock ups and most leaks show a circular flash, and Hajek’s version of this includes an Amber LED on top and a white one on the bottom, but in the circle shape that matches the iPhone 6’s camera opening better. 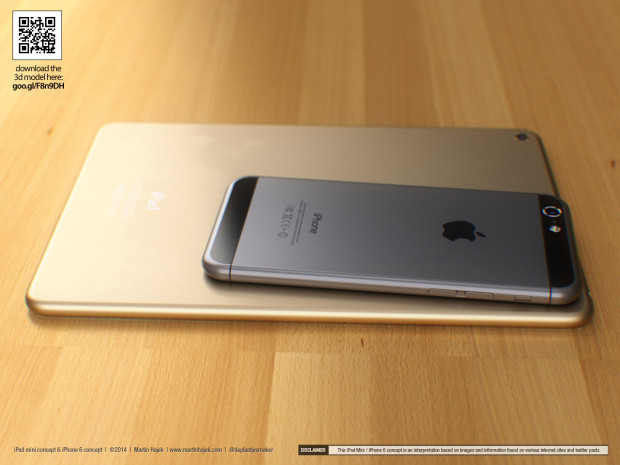 This iPhone 6 concept shows a design similar to iPhone 6 rumors.

The overall shape of this iPhone 6 concept matches the leaks with curved edges, but not an actual curved display. The edges also reflect a rounder design than the iPhone 5s.

This collection of iPad Mini 3 concept images shows a design that borrows from the leaked iPhone 6 details, with similar curved edges and round corners. The iPad Mini 3 rumors do not include detailed design information yet. It is possible that Apple will stretch out the iPad Mini Retina design into a third model, but there is also reason to believe that Apple will match the overall iPhone 6 design as well. 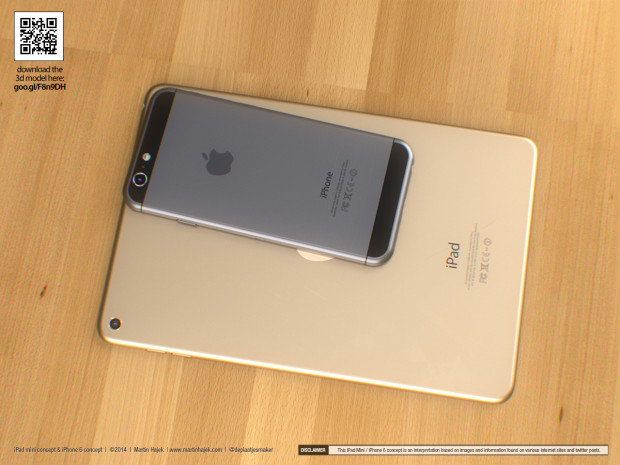 A new iPad Mini 3 concept shows what the tablet could look like if it borrows from the leaked iPhone 6 design.

In the iPad Mini 3 concept from Hajek we see edges that curve just like the iPhone 6. This is a change from the chamfered edges on the iPad Mini Retina and the iPhone 5s. As we don’t know exactly what the iPad Mini 2014 update will look like this concept shows a comparison between an iPhone 6 inspired iPad Mini 3 and an iPad Mini 3 with the same look as the current model and Touch ID.

The most certain upgrade for the iPad Mini 3 is a Touch ID sensor. Multiple rumors point to this feature on all of Apple’s mobile lineup in 2014. The iOS 8 update expands the use of this feature, which is further evidence that Apple will add it to the new iPad Mini. 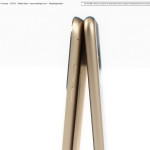 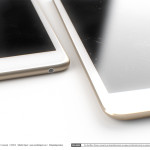 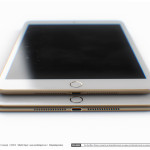 The gallery above compares the iPad mini 3 with an iPhone 6 design to a less updated iPad Mini 3 design. The rounded edges are a major part of the difference, but there is also no orientation lock switch on either concept. This matches a leaked iPad Air 2 back, although that back still showed a chamfered edge.

For more on the new Apple products consumers want in 2014, check out the slideshow below, where you’ll see details on the iPhone 6, iPad Mini 3, iPad Air 2 and others.