One of the biggest downfalls of the new Maps app in iOS 6 is the lack of public transportation in the app itself. Thankfully Apple lets other apps fill in that hole, and companies like Embark are here to do just that.

Since launching a year and a half ago, Embark has helped users complete 40 million trips using public transportation. Recently the company saw as many as 4 million trips made with the apps in just one month. The updates in iOS 6 will likely increase those numbers, but it’s hard to say how big the impact is so far.

Part of the reason iPhone owners use Embark so often is because the apps work even when the user is underground and has no cell service. That makes it perfect for New York City Subway riders. According to Hodge Embark’s New York City apps are its most popular apps by far. The company also has apps for other cities including Boston, Chicago, Washington D.C., London, and San Francisco, Embark’s hometown. 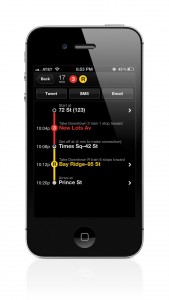 Another key feature of the apps is their accuracy. Hodge said collecting the data for each city is “challenging and complicated,” and uses information from a variety of sources like city public transit organizations, Open Street Map, user feedback, and crowdsourcing. For its New York City apps Embark will even travel to New York to see how long it takes to walk between Subway transfers.

While Apple’s Maps aren’t ideal it’s nice to know there are companies out there like Embark to make getting around in cities easy and painless.