With Android 4.2 Jelly Bean Google hid the Developer Options menu so average smartphone and tablet users wouldn’t accidentally cause any problems on their device. While most normal settings can be found for daily tasks, some advanced options are hidden in the developer options menu, and as a result, some users and devs may want to retrieve them.

This isn’t new to Android 4.4 KitKat or the Nexus 5, but users just getting the flagship smartphone by Google will want to know how. If you plan to install 3rd party custom ROMs or kernels, or do anything that will require developer access and USB debugging, check out the quick guide below to learn how to enable these options. It only takes a moment, and is quite fun at the same time. 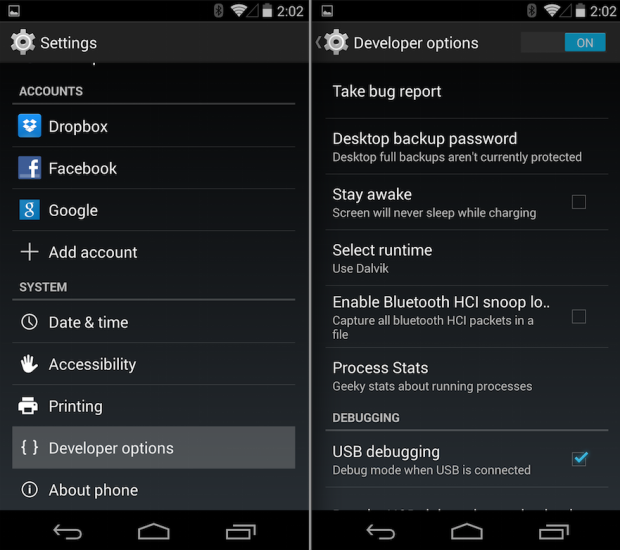 Like Android 4.2 Jelly Bean and above, the options are hidden to most users, but a quick (seven) taps of the finger on a specific place in the settings menu will unlock such features. It’s an odd approach, but Google likes having fun with things, as you all know. So here’s how to enable the developer menu on KitKat.

It’s actually extremely easy and users will want to follow the simple rules outlined below step for step to get these readily available to you.

Settings > About Phone > Build number (Tap the build number 7 times, you’ll get a prompt as it gets close.) And that’s it. It is that easy, and you’re now a developer and have full access to the huge developer options menu, but use caution. 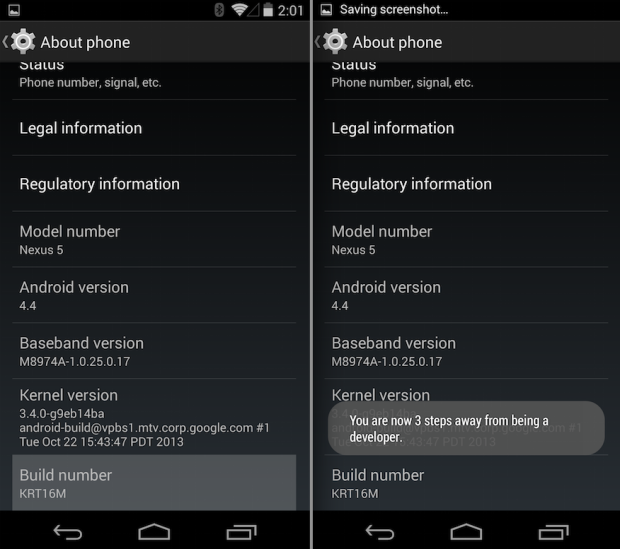 Then, for those who aren’t seasoned developers or Android users, go ahead and do the same multiple taps on the Android Version for some fun. Then long press the K that appears and enjoy the Android 4.4 KitKat Easter Egg. Something Google’s added to every version of Android since I can remember.

Yes it’s extremely odd to hide something such as developer options in such a manor, but any developer needing access could quickly figure this out from a Google search or the developer help menu on Android.com. There’s plenty of issues a regular user could cause from here, so we understand the reason. That’s it. Now enable USB debugging and start hacking that new Nexus 5.