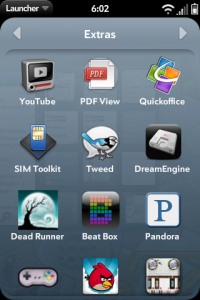 Engadget has posted a review of HP webOS 2.0 that was officially revealed yesterday. The review is based on hardware that won’t be the final shipping version for the next Pre. Even so, the reviewer is pretty high on what HP or Palm or whomever has created here. Makes me even more excited to see how this might work on a Tablet/Slate.

This isn’t just a good OS, it’s a great OS, and the updates in this version have made it even better. It’s obvious that when combined with even slightly better hardware, it’s also a fast experience that makes it easy to get real work done. And that’s the problem with webOS 2.0, really. Palm is still hampered by last-generation, underpowered hardware. The Pre 2 is nice, but it’s not cutting edge, and it doesn’t hold a candle to the iPhone 4 or G2. If Palm wants to survive in this game — let alone truly compete — it needs to push killer hardware into the marketplace now. The faithful are dwindling, and the smartphone race is getting more crowded every day — webOS 2.0 is a big improvement, but if this and the Pre 2 are Palm’s hail mary, they just lost the game.

That last comment points up what I think we’re going to be seeing on a number of fronts including Tablet/Slates in the next year. Everyone is running a race following Apple, and in the case of handhelds, Google, and they have a big lead. Timing is everything.