Last night, I mentioned in a review wrap up post that I didn’t see any HTC HD7 reviews popping up. I went off to play some games and watch some MMA and returned to find a review from Engadget in my RSS feeds. Unfortunately, this review is not the US, T-Mobile version, but the hardware is almost identical. 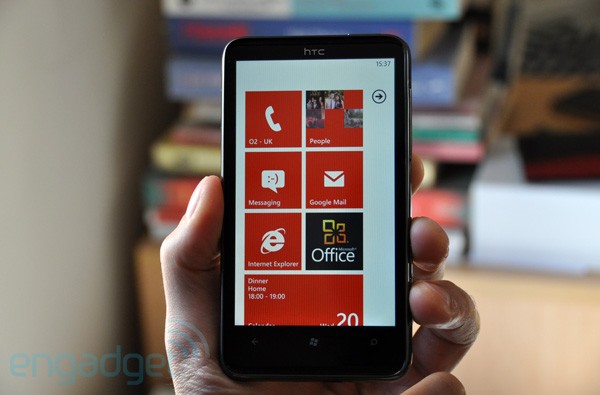 As you can see in the photo above, the reviewer was testing this one on O2 UK.

The screen that just keeps on going meets the OS that refuses to fit on a single display. Yes, Microsoft’s Windows Phone 7, like Windows Mobile 6.5 and Android before it, is getting treated with a 4.3-inch display from HTC for its launch party. The aptly titled HD7 is, by virtue of Microsoft’s stringent hardware requirements, mostly just a stretched-out version of its WP7 contemporaries: it offers the standard 800 x 480 res, 1GHz Qualcomm Snapdragon, 576MB of RAM, and a 5 megapixel autofocus camera with a 720p movie mode. So what sets it apart? HTC will have you believe its Hub enhances the buttery smooth WP7 software, while outside the shell there’s a handy kickstand for landscape lounging and you do of course benefit from an enlarged canvas for your finger inputs. Join us after the break to discover how much that matters in day-to-day use, along with the rest of our thoughts on the HTC HD7.

You can read the entire review, complete with video, over at Engadget. (if you haven’t already)

The HTC HD7 runs Windows Phone 7 and has a 1GHz processor, 8 or16GB of storage memory, a huge 4.3″ screen, 5 megapixel camera, and all the other goodies you’d expect from a quality HTC phone.

It’s definitely a phone I wouldn’t mind using at all, but I don’t think it would have me changing carriers for. The Dell Venue Pro would, but not this one, no matter how much I enjoy HTC phones. I have the HD2, but it’s the European model and isn’t capable of AT&T 3G speeds, so I rarely use it now. If the HD7 is equal to or better than the HD7, I would highly recommend it to those that a) want Windows Phone 7 and b) can live without a physical keyboard.