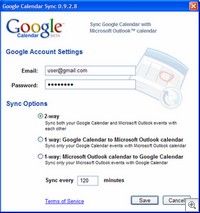 This so far has been a blessing for me. Earlier this month Google released a small tool, Google Calendar Sync, that allows users to utilize two-way sync between Google Calendar and Microsoft Outlook. You can opt for a one way solution as well. So far, it only works with your primary Google calendar and in Outlook the calendar you choose as your default.

What I like about this is that it is almost transparent. Enter data in the Outlook Calendar and on the next sync it appears in the Google Calendar. Because of this I’m now using Google Calendar a bit more on both the Mogul and the iPod Touch and feel comfortable entering data in either of those two devices in addition to my Tablet PC or desktop.

The only thing I’ve noticed so far that is not as slick as it could be is that when I wake up my Tablet PC from sleep or a reboot, the sync usually tries to kick in before a wireless connection is made. This seems to delay the connection to the WiFi network a bit. But hey, its Google, and I’m sure this will be classified as being in beta for at least the next three years.

Meanwhile, Kevin Tofel linked to some info at Googlified that it looks like we might be getting close to using Google Gears for offline Google Calendar access and have it sync up on the next connection.