The good folks over at Tested are gushing about a new Microsoft Surface-esque devices called the ePawn Arena. It’s an exciting gadget that is probably going to be the next big thing in gaming. The best part? It costs just hundreds of dollars instead of thousands.

The Arena is essentially a large TV screen with underlying technology that allows it to detect objects with special tags on them. It’s not a touchscreen surface, though, which is one of the reasons why it’s going to go for a little as 400 Euros. Another reason is that there’s no processor, hard drive, or other technology inside. Instead, it runs games from a smartphone, tablet, or computer connected via USB. 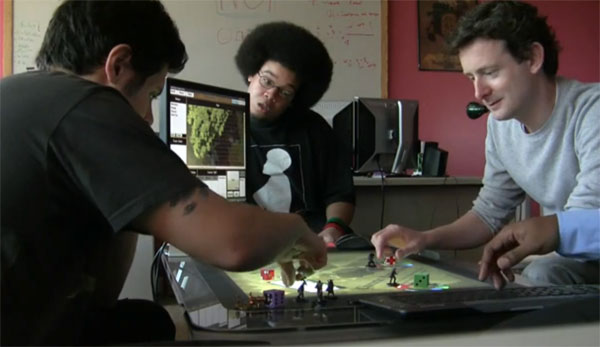 The basic concept reminds me of the GameChanger I wrote about for our iPad gaming accessories gift guide. There the surface the iPad is interacting with is wires under cardboard. Like the Arena, the game can detect where player pieces are on the board.

However, it looks like the Arena turns this concept up to 11. Not only can the surface detect where a game pawn is, it can also detect its orientation and provide animated interaction between them. In a Dungeons & Dragons-type game players can move pieces through a virtual dungeon and encounter environmental hazards as well as challenges from other players.

Plus, there’s a nice melding of virtual and physical gameplay since your attack and weapon choices could appear on the screen, just like in a video game, and players can use a movement of the piece to select.

Though the Arena’s makers don’t get specific with what kind of phones or tablets this will work with, right now I only see iPhones and iPads connected to the demo units. That’s likely because Android doesn’t yet communicate well with devices attached to micro USB ports in the way iOS devices can. That kind of functionality is coming, as announced at last summer’s Google I/O.

Laptops will work as well, though I wonder if the speed limit of USB 2.0 could prove a problem.

Apparently ePawn feels that today’s phones and tablets have the necessary performance to output complex games and deal with the two-way data transfer from the surface. Though I imagine quad-core tablets like the ASUS Transformer Prime will stand out in this regard.

Tested points out that while there may not be much extra work on the development side to make games work with Arena, companies also have to think about the physical game pieces. Building sets with ePawn’s tagging tech built-in could add unnecessary expense. Though if players can buy tags to add to the bottom of their existing figures for very little cost that would be ideal.

D&D-type games aren’t the only kind that will work on the Arena — there’s also an air hockey demo. With an interactive surface there are tons of possibilities.

At 400 Euro the Arena could be within reach of the dedicated gamer or even the dungeon master who deeply wants to impress her or his friends. It’s probably more likely to land in your local gaming or comic shop first, especially if they host local tabletop gaming nights or tournaments. And in this case players can create their dungeons at home beforehand and then just bring their laptop or tablet, hook it up, and start the game.

It wouldn’t surprise me if board game companies got in on this, too. Imagine playing Monopoly or Sorry or even Scrabble on a 26-inch surface. They could build the functionality into existing apps so players won’t have to download anything new.

ePawn has also indicated that they’re interested in bringing out a variation on the Arena that connects to any TV, allowing people to move pieces around on the pawn-sensing surface while the virtual version reacts on-screen. This would be even less expensive than the Arena since the most costly part of that device is the TV itself, not the underlying technology.

I’m really looking forward to seeing how this will play out when the Arena and related technology finally hits store shelves.

For more demo videos and images, check out Tested’s post.