ESPN ScoreCenter for iPhone Gets Big Update After User Complaints

In December, I uninstalled one of my favorite iPhone apps in ESPN ScoreCenter. Today, I reinstalled the ESPN’s app after a major update, which was helped along by user complaints and poor reviews, and so far, the difference is night and day.

As an avid sports fan, I used the ESPN’s app on a very regular basis as I wanted to stay informed about the latest news and rumors about my favorite teams. I also read it for the daily news and columns and depended upon it for scores when I couldn’t get to a television. However, an update that ESPN rolled out in December fell so flat on its face that I uninstalled it immediately. 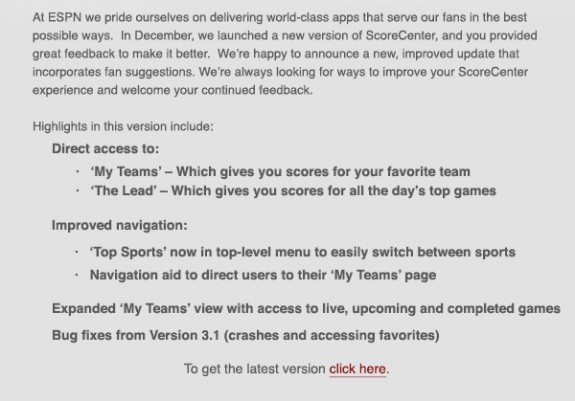 That was tough to do because it was an app that had I used for quite a long time and one that had become heavily integrated into my daily smartphone usage. I didn’t realize how reliant I was upon this application until ESPN forced me to uninstall it.

Simply put, the update was terrible. Just to give you an idea about how terrible the update was, ESPN ScoreCenter completely did away with the sport of boxing, forcing those who wanted Boxing news to head to their webpage through a browser. There were also other blights like having to make an account to log on to track teams, an utterly confusing navigation system, video crashes, stability issues and more.

These are things that I discovered within the first hour of installing the update. After writing one of the only App Store reviews I’ve ever written (Naturally I gave it one star), I pleaded with friends who I knew used the application, including my girlfriend, to stick with the previous version. I myself was resigned to finding another application as the ESPN ScoreCenter of December and January was an abomination.

After a month of using Yahoo!’s Sportacular, I received an email from ESPN informing me that it had released an update to ESPN ScoreCenter and that it had improved the software based on customer feedback. After seeing its app rating plummet to one star and after hundreds upon hundreds of terrible reviews, ESPN had enough and it’s now trying to lure the customers it lost, back into the fold.

I’ll admit it, the email got me hook, line and sinker. I installed the app immediately as Sportacular, while good, just simply wasn’t as good as the previous ESPN ScoreCenter application in my book. But was it what ESPN promised it would be? 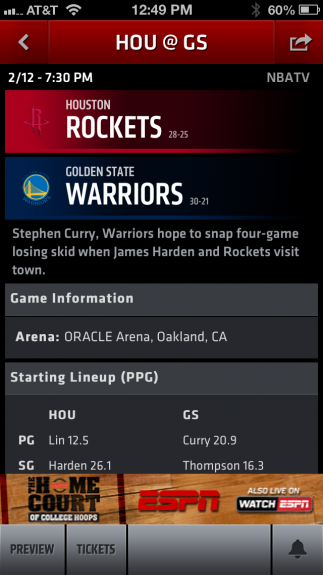 Yes, ESPN ScoreCenter is back.

In a word, yes. After using the new and improved ESPN ScoreCenter application I can say that while it might take a bit to get used to, ESPN made necessary changes to the app, changes that should definitely bring some of its former users back.

Now, I don’t have to log in to access scores and favorites and standings. Boxing is back. The menu tab in the top left corner is concise and informative though I wish it still had the toggle on the front page instead. And while I still am a bigger fan of the previous design but I’m sure I’ll get used to the new one as time goes on.

As someone who thought that a big company like ESPN would simply ignore its users and let ESPN ScoreCenter waste away, I’m both surprised and elated that the company decided to listen to customer complaints, make the necessary changes, and implement them into an update.

It was tough installing ESPN ScoreCenter from my iPhone 5 back in December and I hope that I never have to do it again.