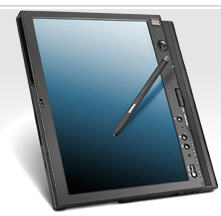 As I reported two weeks ago, the Thinkpad X60 SXGA Tablet PC, that Lenovo was allowing me to evaluate, started to have the “screen gone haywire” issue that many other owners of the SXGA version of the X60 have also experienced.

I reported this to our contacts at Lenovo, and asked them if they could send me the touch version of the X60 to evaluate instead. I miss the SXGA, but I have to tell you that after using the touch for just a little while, I think I’m going to enjoy this one a lot more.

The screen appears just as bright, looks as good or better outside, and I get to enjoy the new interaction that I’ve really come to appreciate with a tablet – touch. In addition, touch on the X60 is a much better experience because it automatically turns off when using the active pen. The only negative is that SXGA is gone.  Sure would be nice to have the best of all worlds – touch + sxga + active digitizer. If any OEMs are reading, please begin to incorporate these nice touch / active experiences into an SXGA screen.

I’ve said it before and I’ll say it again – taking in account all the delivery and quality issues that Lenovo has been struggling with lately on their SXGA and cpu’s, if I had to choose one tablet pc among all that I’ve tested, evaluated, owned, or have just looked at, the X60 would still be my number one choice. Hands down, I believe it is the best convertible on the market.

That said, Lenovo has got to get a handle on these supply and quality issues. They hit the starting gate hard with a fantastic product and launch, but there have been many trip-ups along the way that has given their fine product an otherwise bad reputation. I was really hoping that Lenovo would have learned alot from the X41 launch, but apparently there is still a lot of work to be done. I expect the Santa Rosa chip to be available in the X60 later this year, but until then, the SXGA and XGA versions are currently available with a slighly slower 1.66ghz Dual Core processor. Lets hope that Lenovo has purchased enough cpu stock from Intel to meet demand when the X60 becomes available for order with Santa Rosa.

I’ll keep this evaluation unit for two to three weeks, then I’ll send it back to Lenovo and order my own multi-view touch X60.