On the evasi0n website the iOS 6.1 jailbreak progress bar already reads 99%, and the team is reportedly working on final testing before the official jailbreak release.

Late Sunday evening the team confirmed the iOS 6.1 jailbreak release is on track for Monday, but did not give any time.

Read: How to Prepare for the iOS 6.1 Jailbreak Release

As it turns out, the code used to move the status bar on the evasi0n website is a formula that will hit 100% at Noon today. The answer appeared on Reddit late Sunday evening, and as Redditors discussed the finding, Planetbeing replied to the Noon comment, saying, “I like your solution the best. :).” 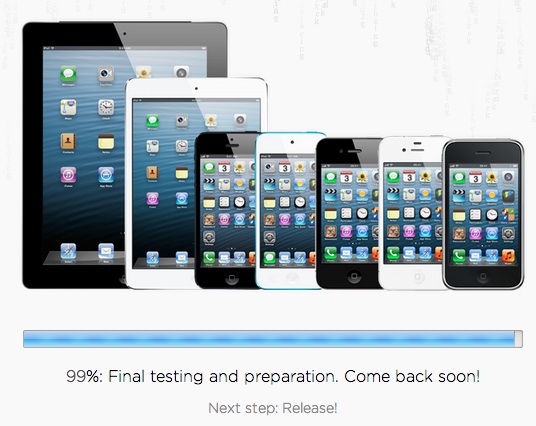 The evasion release date is set for today at Noon eastern.

The evasi0n iOS 6.1 jailbreak is an app that will allow users to jailbreak the iPhone, iPad and iPod touch running iOS 6, iOS 6.0.1, iOS 6.0.2 and iOS 6.1. The tool comes with apps for Windows, Mac and Linux. All of the tools will be available at launch, a break from past jailbreaks which typically arrived on Mac first.

According to the evad3rs, the iOS 6.1 jailbreak will take 5 minutes to complete using the evasi0n tool. Users should also factor in the time it takes to back up their iOS device and restore it if they plan to follow the recommended steps. Users with a passlock should remove it from their iPhone or iPad before using the evasi0n jailbreak app.

Jailbreak QA includes a page dedicated to what you need to know about the evasi0n jailbreak, which is recommended reading for anyone new to jailbreaking. Below is a condensed version of the information they share.

The evasi0n jailbreak is the work of the evad3rs including @planetbeing, @MuscleNerd, @pod2g and @pimskeks. The team is taking donations on the evasi0n website. Users should avoid downloading iOS 6.1 jailbreak tools from other websites, especially those who charge up front for the software, as it is available free on evasi0n.

The team is asking users to include the #evasi0n hashtag in tweets to get the jailbreak trending.

Don’t forget #evasi0n in your tweets! It would be so awesome to make in trend worldwide :)

Read the latest iOS 6.1 jailbreak news and stay tuned for a how to jailbreak with evasi0n guide.