Everex may have been disappointed when Wal-Mart announced it was pulling its Linux based ultra-portables from store shelves last week, but that doesn’t seem to have stopped them from going forward. They’ve just announced the Everex Cloudbook CE12200J for Japan and it contains a touchscreen and it will be running Windows XP not the gOS. Of course the price has jumped up as well to $600. 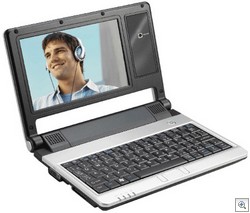