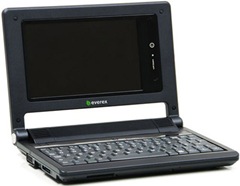 I hope the ASUS Eee is getting prepared, because the new Everex Cloudbook is coming to town. The specs are not all out yet, but the Everex Cloudbook is said to have a 7" screen and run the gOS Linux variant, optimized to work with Google Apps. You may remember Everex as the company that has been selling all of the inexpensive systems at Walmart recently, also running gOS.

The Cloudbook is supposed to cost $399 and be available January 15. If these specs are real, this could be an interesting competitor to the Eee. Many people will prefer the specs of the Cloudbook, with the faster processor and hard drive. Supposedly the Cloudbook will launch at CES the week of Jan 7. I’ll certainly be on the look out!

There are also rumors of a Developer version which would add a touchscreen, Skype phone, and alarm clock. I can really get into the touch screen and Skype phone, but alarm clock?? That’s um, unusual.  This Developer version is supposed to be similar to the NanoBook, which has some pretty nice specs in it’s rumors. With a touch screen, this could be a very interesting platform for an ultra portable.