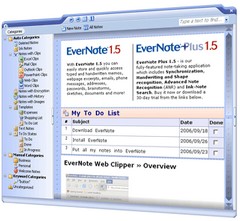 The good folks at Evernote have released EverNote 1.5. The new version of this notetaking tool inlcudes a host of new features. Some include:

As usual with Evernote there are multiple versions. There is a free version and a Plus version which inlcudes full functionality. There is also 30 day trail of the Plus version.