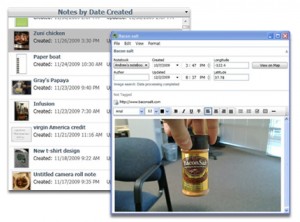 A new beta version of Evernote 3.5 was released yesterday (popped up on my PCs last night), which adds a clipping tool to Firefox, a way to email notes straight from Evernote, and some attractive interface enhancements seen here.

Not too sure about that new email system though. I see the merit of the idea, eliminating reliance on a desktop email client which are becoming less common. But it does not appear to be synced with an address book, which ruins it for me.

Really looking forward to seeing 3.5 make it to gold. I think the layout is much improved and the new ink note button is great. Unfortunately, I’ve had to stop using it on my Tablet PC due to stability issues and my email server seems intent on blocking the crash reports, greatly reducing my effectiveness as a beta tester. It works well enough on my media PC though, which is primarily a note receiver.