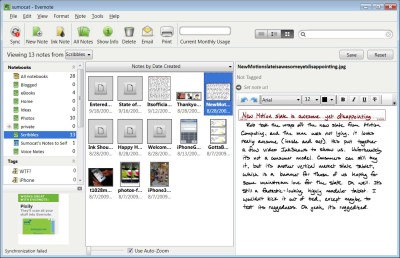 A bit of news that caught us off-guard today: a new version of that “memory drawer” Evernote is available for beta testing. Caught us by surprise because news broke via CNET before anyone else posted it, including the Evernote Blogcast. Any other week, a company blog not getting out first word of their product would strike me as odd, but it fits this crazy week perfectly.

Back on topic, the new version offers a ton of new features. The most apparent is the new thumbnail view alongside the full view. I like this a lot. The sheer volume of my notes requires me to use search to find anything, but even in small folders, I find browsing through notes on the old version to be a chore. In just the brief time I’ve tried it, the thumbnail view has been much more enjoyable. 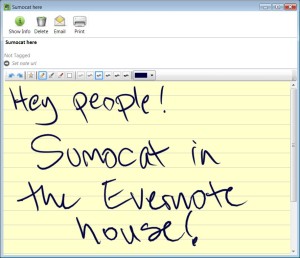 For us pen input fanatics, the ink toggle switch, which I found irritating, has been replaced with a dedicated button for ink notes. The default background for the note is yellow, giving it a legal pad vibe. At first glance, it looks like it is stuck in the side window, but double-click on its thumbnail and the ink note will pop out for full-screen markup. I really commend this move. Not only is it more appealing to me as a user, but it brings ink to the forefront (and revealed to a couple of reviewers that Evernote was ink capable).

Lots of other added functionality on top of that, including as-you-go spell check and autocomplete for tags (another one I’ve wanted). I’ve barely had a chance to scratch the surface (in part because I have nearly a GB of notes to sync). In fact, they cite the huge number of changes as the reason they’re keeping this version as a beta, just in case users feel too overwhelmed by them (oh, and it’s designed for Windows Vista and 7, so there are some known glitches in XP). From the brief bit I’ve seen so far, I can’t imagine wanting to go back. Full rundown on the Evernote Blogcast.