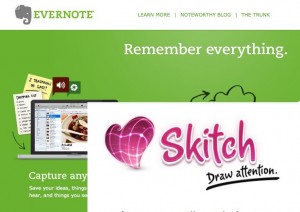 Things seem to be going very well for the folks at Evernote. Holding its first ever Trunk Conference, CEO Phil Libin talked about the growth that Evernote has been experiencing and looks to make. A part of that growth is the announcement that Evernote has acquired the popular Mac screen capture App, Skitch. Sktich allows you to grab screen shots and do some editing and markup on the capture.

I use both Evernote and Skitch all the time and I’m thinking this marriage will be a happy one for consumers. Libin also stated that while Skitch is now a big part of the Evernote family, it will remain a separate App. He also says we’ll be seeing versions for Windows and other platforms, including a just released version for Android and an iPhone version is in the works. There’s also talk about major upgrades for Evernote coming soon.

Skitch can currently be had for $20 on the Mac App Store but Libin says it will eventually be free.