Evernote has announced that it has updated its iOS application to support the new iPad’s Retina Display, just a day before the device lands on the doorsteps of  those who pre-ordered on announcement day. The developer has been hard at work getting the application ready for the arrival of the new gadget and from the looks of things, fans of the app will not be disappointed.

As you can see in the image below, the application now has graphics that are optimized for the new iPad’s high-resolution display.

The Retina Display allows for richer, more vibrant text, which is something that reviewers have raved about in their reviews of Apple’s latest tablet. Of course, support for the Retina Display isn’t the only new addition to the software. 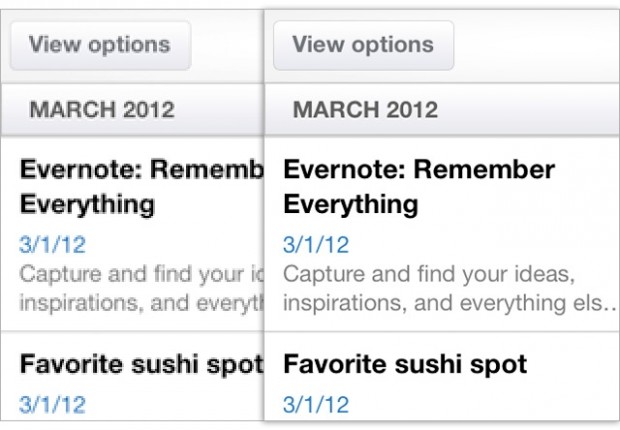 Evernote’s note editor is now much improved over the last version with the company stating that it’s more reliable and responsive. That’s huge.

In addition, they’ve made a few improvements to the checkbox as it now supports indentation and new lines that are created after the checkbox will now insert a new box automatically.

Users can now select text by tapping it.

Evernote has also improved its note titling feature. Auto-title, a feature that was introduced in the last update, will now show more suggestions based on lists that you have created in the past.

All of these improvements are fairly subtle –  besides the graphics update, but it’s the attention to detail that has made Evernote such a fantastic application.

Oh, and there are also some bug fixes on board as well including a fix for sync errors that users have been seeing.

All in all, Evernote just got a little better, especially for those who plan to use it with the new iPad.