Evernote for Windows is all-new and ready for action 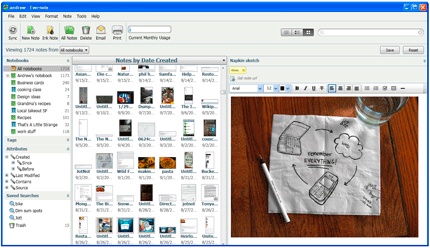 Evernote 3.5 for Windows is out of beta testing and ready for real-world use according to the Evernote Blogcast.

I had jumped on the beta boat early on and was really impressed with the new interface. Ink notes, while still open to improvement and enhancement, are much easier to launch. The thumbnails and side window greatly improve note-viewing. Search is more useful than ever. It also more closely resembles the Mac interface, useful for you dual-platform users. The new and improved feature list is huge.

Unfortunately, I eventually had to drop out of beta testing for various reasons (such as having too many beta products running at the same time), but I am very eager to give the gold version a try. Hopefully the sheer weight of my notes will not crush it this time (may have been a problem for me earlier). Remember, Evernote is a “freemium” product – free for basic functionality, fee for premium features – so it costs nothing to try.