EverNote Heads into the Cloud 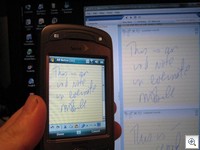 This is certainly going to be interesting. Most Tablet PC users know of EverNote. The note taking, info gathering application that allows you to Ink notes, capture data from the web, and stores it in one long roll of information that is easily searchable. Primarily a desktop application, it has been one a stable of many Tableteers because of its Inking features. Back in November of 2007 they released an unsupported technical preview of EverNote for Windows Mobile as a market test that allowed you to Ink and capture notes on your mobile device and do some syncing with your desktop or Tablet PC. I was more than pleased with the technical preview when I gave it a try.

Well, now EverNote is upping the ante and heading into the cloud. They’ve announced a private beta (general release is targeted for March) of a web version that aims to allow you to grab, store, search, and retrieve your data from just about any device. Think about that. For those who are platform agnostic, you would theoretically be able to grab your data on any platform you’re working with at the moment. TechCrunch has plenty of details on the beta and also a limited number of private beta invites. I’ve signed up and here’s hoping I’ll get a chance to check it out soon.

Here’s a quote from the TechCrunch article:

In the words of CEO Phil Libin, “The main idea of Evernote is to create an external brain.” Evernote lets you highlight any portion of a Web page and clip it, or take a picture with your camera phone and send it to your PC or the Web. Each of these digital “notes” is archived and can be searched, including any words (even handwritten ones) visible in those pictures. For instance, you can search for “crazy milk sake” and all the pictures of sake bottles will come up, with the the word “crazy,” “milk,” and “sake” highlighted in yellow

Again, I was very impressed with EverNote for Windows Mobile. I’m excited and anxious to see how this will work with EverNote in the Cloud. Meanwhile check out this video or this publicly available notes site for what’s up with EverNote on the web.