Evernote, the app that is always on everyone’s Top 10 list, has been under fire lately for some problems. The heat was so intense that the Evernote CEO Phil Libin took to the Internet to say that some internal soul searching had been done and more was underway. Evernote was being criticized bugs that weren’t being addressed, poor communication with users, and for focusing too much on adding new features instead of maintaining its existing core service sufficiently. Libin promised a course correction and we’re beginning to see some of the results with an update to the iOS versions of Evernote. 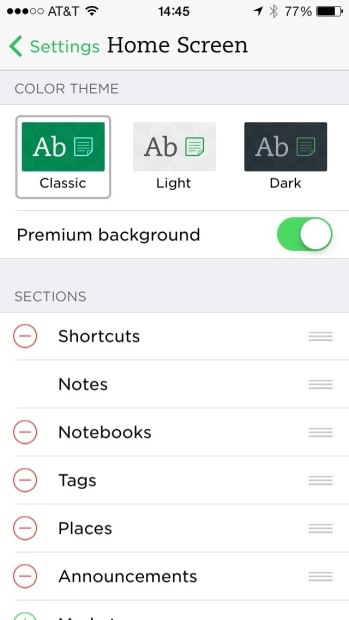 First Evernote announced that it had done some back end work to improve syncing speed between its servers and your notes. Second, Evernote has issued a bug fix that corrects the audio syncing bug that brought about the recent controversy. The iOS update also adds improvements to the business card scanning functionality. And users can now customize how Evernote looks on their screens.

Customization includes the ability to choose among three different color schemes, light, dark, and Evernote green. They also can choose to hide certain sections as well as rearrange the sections they would like to see when the App is fired up. Control buttons have been moved to the top of the display for easier access. The customization features look like a real plus to my eye.

I’m still waiting to see when Evernote is going to fix the horribly bungled Evernote Touch App for Windows 8.1 RT. There’s been no open communication about the problems users of the Surface and Surface 2 Tablets experience, which include actually not getting the App to run. Evernote typically doesn’t update all of its Apps across multiple platforms simultaneously, but a little communication about its plans for the crash prone RT version might keep a few users from choosing other options in the meantime.