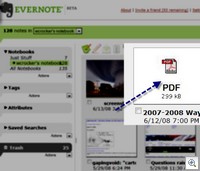 The new EverNote, which is still in beta, keeps rolling out the updates for both its Windows, Mac, and web versions. They just pushed out more updates today. EverNote is now a fixture in my toolbox of applications and I use it constantly to grab information, especially things that I want to share between multiple devices. Although we still don’t see Ink Support for viewing Ink documents on the Mac version, things seem to be progressing along well on that front. And curiously EverNote recently announced that the web version now supported PDFs. Well, sorta, kinda. You can view a lovely PDF icon, but you have to open up the document in an external viewer to be able to view the document. No thumbnail quick glances in the PC version, or the web version, or the iPhone version, although you can can get a thumbnail view of the document on the Mac.

I’m also still not thrilled with the PC versions UI and wish EverNote would add some of the features that it contains on the Mac version. Here’s hoping the folks at EverNote keep churning out those updates and pay a little more attention to things on the PC side the next round.

By the way, I’ve still got some EverNote beta invites available. If you’re interested leave a comment to this post and include your email in the form. We’ll see it, others won’t.