Skitch is a popular screen capture an annotation utility that I use all the time on my Mac. I like it quite a bit. Evernote recently bought Skitch and it looks like that acquisition is going to pay off for users of Skitch and Evernote in the long run.

Now Evernote has released Skitch as an iPad App that allows you to have essentially the same functionality on that device. It’s a free App. You can crop an image, dress it up with text, boxes, circles, arrows… you know the drill. There is also an Android version of Skitch available as well. It’s been available for some time. 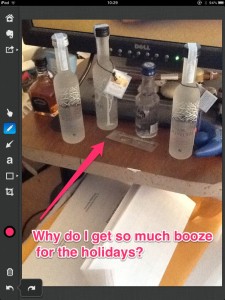 If you’re looking to capture something off of a web page, you browse to the page you want from within the App, click the camera button and you have the visible portion of the web page to work with. You can then crop and annotate as you see fit. You can essentially do the same with your photos, maps, or screenshots you’ve taken from your iPad.

You can also share an image via Twitter, save it to your Camera Roll, send it via email, or send it to Evernote.

There are certainly plenty of photo annotation Apps out there for the iPad and iPhone (word is there will be an iPhone version in the future.) So, choosing one over the other is really matter of personal preference or which one has the right tools for you to accomplish the task at hand. For Evernote users, I think Skitch will prove one of the popular choices given its simplicity and even if you don’t have an Evernote account it is a handy simple tool for simple annotation.
https://www.youtube.com/watch?feature=player_embedded&v=L0KQbLOPDvc