This morning, Evernote grabbed me with this headline: Mac App Store more than doubles new users. I assumed that meant their rate of new users of their Mac software doubled, which is a strong accomplishment, but then I clicked through to discover it’s not Mac only – it’s across all platforms!

Take a look at the chart: 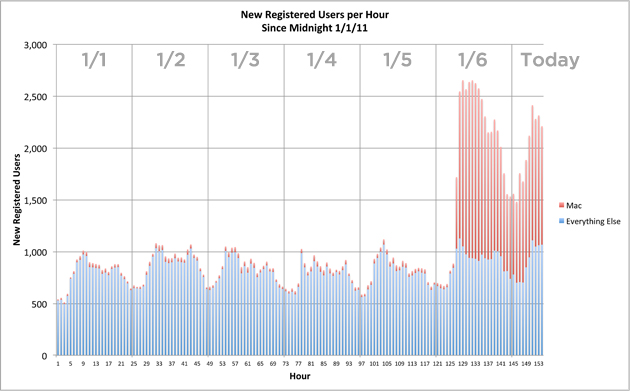 Obviously, this is a huge deal for Evernote, as well as a big feather in the cap for the Mac App Store. What’s truly staggering to me is how Mac can have this kind of impact for anyone given their share of the personal computer market. The key element, I think, is personal and small business use. Mac holds a much larger percentage of this segment than of the overall market. While Evernote has business applications, it does not have the kind of penetration in big business and enterprise that it does with personal use. Hence, it is ideally suited for success in the Mac App Store. Developers should take note of this when deciding if the Mac App Store is right for them. Oh, and a warm welcome to all my new fellow Evernote users.