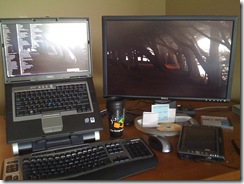 The past few weeks I have been getting into a new rhythm using the new (to me at least) Motion LS800.  It’s amazing how much I rely on this little guy now!  As you can see from the picture, I have the LS800 sitting right next to me every day.  It’s a great companion to the BIG Dell I have sitting right there.  It’s also light enough that I carry it in the same bag without a problem and also take it solo when going to meetings.

What application have I been using the most?  Evernote – running at the same time on each computer to keep me in sync -  2 examples of how I use it:

Just a few things for thought –

I know there are going to be questions about OneNote – 1. Not free 2. Mix of on network and off network usage would keep from reliable syncing from a shared notebook on a server 3. No need for all the extra features in my current usage pattern.

There are other benefits of of the LS800 in my current workflow, I’ll post a few more as time goes on.