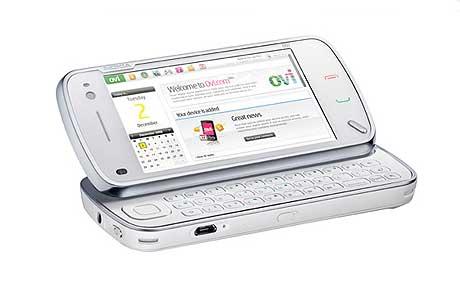 One Kevin C. Tofel at jkOnTheRun passes word that all of New York City is invited to welcome the Nokia N97 to the States. Sounds like fun with a capital “F” for Finland. (Hah! More like “Funland.” Get it? ‘Cause they’re fun.) Too bad hardly anyone here is going to line up for what is, by most measures, the most advanced smartphone to date.

No, that’s not sarcasm: the N97 looks like an outstanding piece of hardware. Looking through the specs, most of its features beat the Palm Pre, iPhone 3GS, and G1, and in some cases, combines the best of all of them, like 32GB onboard storage + microSD expansion. (Lack of multi-touch control is one notable exception.) Nokia makes incredible phones, no doubt about it. The problems lie with the pricing and software.

First, it’s $700, no subsidy. Yeah, I know people lined up to pay almost that much for the first iPhone, but two years later, people aren’t going to pay that. Nokia really needs to partner with a U.S. carrier and bring down the purchase price if they want to break into our smartphone market. The N97 is a superior device, but not a lot of people will pay 2-4 times the price of its competitors.

Second, the software lags behind in the consumer arena. S60 is a solid OS that gets the job done. But I’ve been looking through the interactive demo, and I don’t see the “dazzle” that the Pre or iPhone or even the G1 deliver. Part of that, I think, is due to the lack of a capacitive touchscreen and reliance on the landscape-oriented keyboard. I see a lot of two-handed operation and scrollbar usage in the demo.

Also, I don’t know if anyone else has checked out the Ovi Store, Nokia’s marketplace for apps, but I found it very unappealing. It’s not the lack of apps that bothers me (more will come), but there just isn’t enough information on the apps there to lure in buyers. It really needs work.

Spec-wise, there’s no comparison between the N97 and its competitors. But if consumers cared about specs more than price and interface, we’d all be using Nokia phones already. Anyone ignoring that and buying this bad-ass device anyway? If so, what makes it worth $700 to you?