The iPad Air is a blazing fast iPad that makes iOS 7 feel smooth as silk compared to the iPad 3 that many users are upgrading from.

Thanks to the new Apple A7 64-bit processor and the latest IOS 7 optimizations everything form opening apps to typing and working on the iPad Air feels smoother than iOS 7 on older devices.

The easiest way to experience this in person is to head to a local store selling the iPad Air and the iPad mini and play with both for 5 minutes. The iPad mini uses an older Apple A5 processor which is two years older, similar to the iPad 2. 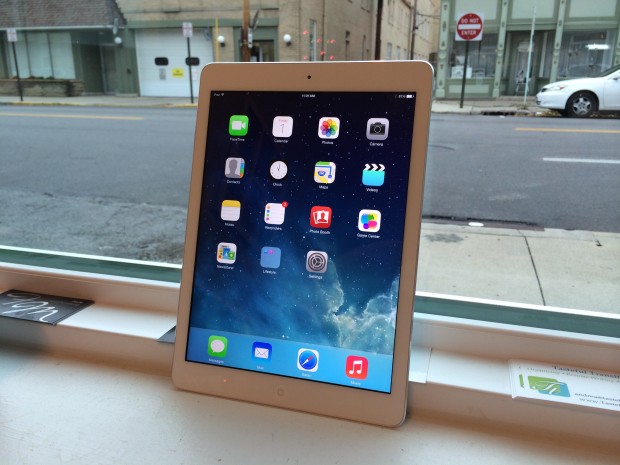 The iPad Air is fast, here’s how it compares to the rest of the iPads, iPhones and iPods that Apple sells.

If you can’t head in to a store to check out the performance difference in person, we’ve benchmarked all of the current iPhones, iPads and iPod touch devices Apple sells to show just how dramatically different the performance is.

The chart below shows the benchmarks of every Apple device running iOS 7, which is also exactly the same devices that Apple is selling in their store. The iPad 4 is no longer on the main store shelves but is still available as a refurbished iPad that $20 cheaper than the iPad 2, with a higher resolution display and double the performance. Here’s why you shouldn’t buy the iPad 2. 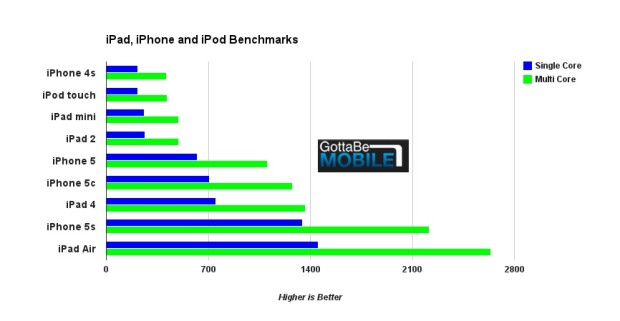 Here’s a look at the performance of every iOS 7 device Apple sells.

As the chart shows, the iPad Air is nearly twice as fast as the iPad 4 which Apple put on sale last year and five times faster than the iPad 2 that Apple still sells for $100 less than the iPad Air. The iPad 2 may look like a good deal to many users, but with slower performance users are better off saving $100 more or picking up a refurbished iPad 4, which narrows the performance gap.

This isn’t just for users who plan to game, the higher performance delivers faster animations so everything from switching apps to typing and navigating around the iPad will be faster. One of the most prominent examples is using the multitasking in iOS 7. Side by side the iPad mini is slower, to respond to the taps or presses.

Mashable shows a speed comparison of the iPad Air vs all previous iPads.

Of course users that plan to play games like Infinity Blade 3 and other graphically intense games should consider the iPad Air over the other devices as it will likely receive better treatment from developers when it comes to graphics.

The iPad Air is now available at Apple and a variety of retailers starting at $499. Apple is also bringing the iPad mini with Retina display, often called the iPad mini 2 to stores later this month with similar specs in a smaller package, for users who want a more portable package.