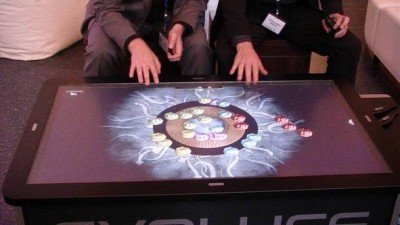 A German company called Evoluce is going big with multi-touch – really big – by offering 47″ HD LCDs, called The Evoluce ONE, capable of recognizing an unlimited number of points of contact via touch or pen. Their promotional video demonstrates both multiple cursor and natural gesture control by fingers. The ONE supports multi-touch in Windows 7, but they’re also calling developers to contribute their own multi-touch applications to take advantage of its capabilities. I may have found my next desk surface (in a far-flung future when I can afford it). Full press release after the break.

“Windows 7 launched at the end of October 2009. Our Evoluce ONE is launched too. The 47 inch multi-touch LCD supports not only Windows 7, but also a variety of other innovative multi-touch applications coded in Flash, C++, WPF or Silverlight. Our developed “Integrated-Through-Screen-Optics” (ITSO) technology enables true multi-touch and multi-pen applications, that can be controlled simultaneously by pen, finger, gesture and object recognition,” said Wolfgang Herfurtner, CEO of Evoluce AG.

The comfortable multi-touch operating on the surface is achieved by a scratch-resistant coating. The screen has been designed for easy horizontal and vertical integration or can be a stand-alone device.