Ubisoft says that users following along during next week’s Gamescom 2014 trade show can expect a ton of new footage and information concerning many of its most popular games for the Xbox One and PS4. That includes Assassin’s Creed Unity, Far Cry 4, Just Dance 2015, Just Dance Now and The Division.

Ubisoft revealed more about its plans for Gamescom 2014 in a post just yesterday meant to highlight the diversity of its portfolio. Many of the titles that Ubisoft plans to show off at the event are a given as Gamescom is the last large-scale games tradeshow before many of its holiday and fall releases arrive on store shelves. That being said, the company does have a few surprises planned. 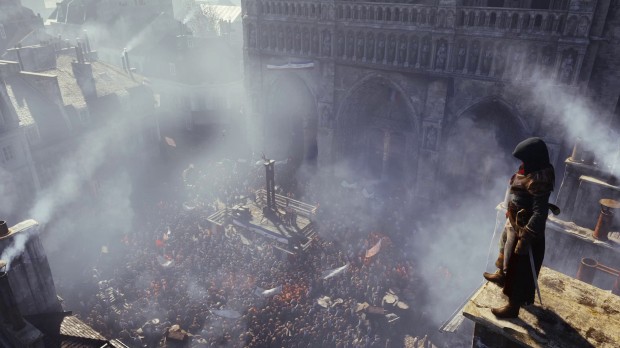 Of all the titles Ubisoft plans to show off at Gamescom 2014, the Assassin’s Creed games have the highest profile.

That isn’t to say that there aren’t plenty of things that Ubisoft can discuss at Gamescom 2014 other than them. If the Assassin’s Creed franchise is what everyone buys every year, The Division is the game users can’t wait to see more of. It takes place in post-apocalyptic New York City, and the videos Ubisoft has shown off of the game software look absolutely stunning. Far Cry 4 is also on the docket too. Far Cry 4 is an open-world adventure game that also has some pretty decent graphics.

Users can also expect a few surprises from Ubisoft at Gamescom 2014. The video game developer’s press release hints at “as-of-yet unannounced titles” making their début at the trade show. That’s in addition to more casual-oriented games like Just Dance Now and Just Dance 2015 being shown. Neither of those titles are going to get hard-core shooter players excited, but they probably can’t come fast enough for users who like rhythm games and own an Xbox One, Xbox 360, PS3, PS4, Wii U and Wii. Just Dance 2015 arrives on store shelves October 21st in North America and October 23rd in Europe is is all about users moving around instead of sitting in one place with a controller.

Gamescom 2014 isn’t just the last chance Ubisoft has to reach out to their western audiences before the holiday season, the event will play host to many other gaming companies trying to get their titles in front of users before they arrive next year too.

Microsoft has confirmed that we’ll see more of Remedy Entertainment’s Quantum Break at Gamescom 2014. The company has also teased some announcements too, possibly hinting at major changes to the Xbox ecosystem or even new games being announced during its press briefing. Microsoft has so many announcements that it’s streaming its Gamescom 2014 briefing on through its Twitch.TV profile.

Gamescom 2014 officially kicks off on August 13th. The festivities last until August 17th.