Now that Intel has released the Centrino 2 platform, I’m expecting to see a series of new and refreshed devices coming down the pike. Fujitsu’s T5010, which we learned about courtesy of Virginia Tech, is now starting to get talked about openly, at least on Aving.

Also on Aving, it looks like HP is refreshing the 2710p with the Centrino 2 and a new model number, the 2730p. Now the question becomes when will be seeing these new models for sale, and which Tablet PC OEMs will follow suit.

Notable specs on the new HP 2730p that we are seeing pictured on Aving:

UPDATE: I just heard from HP about this leak, and apparently Aving has a number of the specs wrong. We’ll see what the 2730p actually turns out to be. It is exciting to see an update coming soon, though. 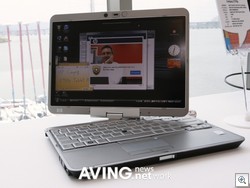