The Mars Curiosity rover is sending back beautiful photos of Mars, but looking at the photos on your computer can’t compare to the interactive 360 degree panorama available on the iPhone and iPad.

Photographer Andrew Bodrov stitched together the Mars Curiosity rover’s photos into an amazing panorama that moves as the iPad moves, making it look as if you are in control of the Curiosity’s camera.

The amazing imagery feels more immersive on the iPad, especially with the ability to zoom in on the rover and swivel around to take in the mountains in the distance.

The overall image below shows a full look at the stitched together photos, but for the most impressive viewing, send this link to an iPhone or iPad. 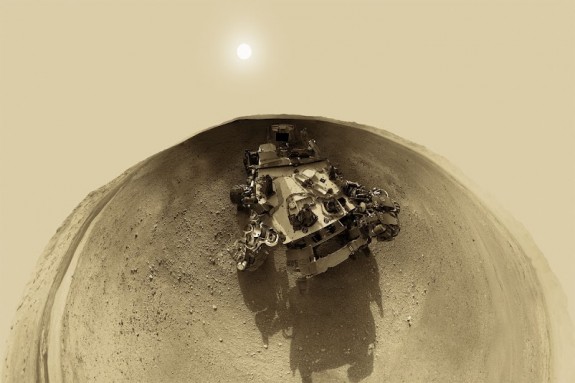 View the interactive Mars panorama on the iPad or iPhone.

The 360cities.net viewer pairs with the gyroscope inside these devices allowing users to control the view just by moving the iPad. The iPhone 4 may show some stitch lines, but this should work on any iOS device.

After checking it out on my iPhone I was even more impressed to see how this looks on the iPad. The martian landscape looks amazing on the new iPad’s Retina Display.

Bordrov tells the Talking Points Memo he touched up the photos in Photoshop, adding the sun based on old photos of Mars from an earlier rover. The panorama’s location claims New Mexico, but this is thanks to the need for a location in the 360cities.net software, not a sign of a conspiracy.

The Mars Curiosity rover landed on Mars in early August to begin exploration of the Gale Crater, Mount Sharp and other areas of interest inside a 5 x 20km area. The Curiosity rover will explore for one Martian year, or 687 Earth days.