Last week, I told you about my horrible experiences with Facebook for iPad and how I hoped the issues I had been having with the software would be fixed with the app’s rumored Retina Display update. Well, that update has arrived today and the let me tell you. Facebook for iPad does, indeed look gorgeous on the Retina Display. And better yet, Facebook has fixed some of the bugs that had been annoying me for quite some time.

The update comes shortly after it became known that Facebook was working to update its app to support the new iPad’s high resolution screen.

After playing around with the app for a little bit, it seems that it has.

You can view the full list of improvements below: 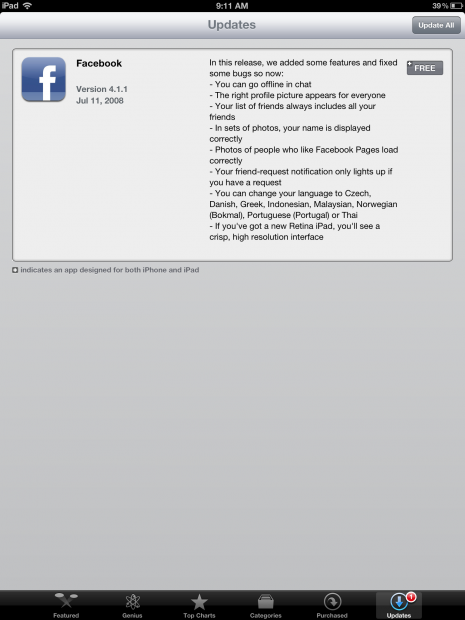 Now, does this cover everything that’s wrong with the application? Probably not. But I haven’t run into any major problems yet. In fact, I can actually look at my own profile again.

Before, there were no photos and information showed up when it wanted to.

Chat appears to be better equipped as well. Chat was actually so bad, that I stopped using it on day one, preferring to stick to the chat feature on my iPhone instead.

The application hasn’t crashed yet either.

So, all in all, it appears Facebook has taken a step in the right direction with this update and my hope is, it releases another update after all of the smoke from this update clears.

Is the new version of the app any better for you?