A new update to Facebook for iOS that will hit later today brings Chat Heads to the iPhone and iPad, and brings a new News Feed layout to the iPad.

Unlike the Android version fo Chat Heads, which can place the floating circles with quick conversations over any app, the feature is only available in the Facebook app in iOS. The feature also only includes Facebook messages, whereas Android users can use Chat Heads for SMS. The difference is because Apple locks down its platform more than Google does, limiting what apps can do to the whole OS. 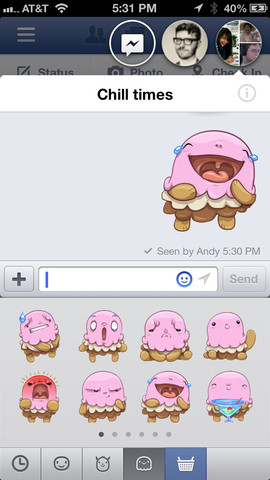 The new Facebook app also brings stickers to Facebook messages, a feature of other popular apps such as WhatsApp and Path. Stickers are like larger versions of emoji that display emotions or just cute characters. The stickers in the preview include giant smiley faces, a whale-like creature and famous Internet cat Pusheen.

Users will likely have to pay for stickers when the app comes to the App Store, but they were all free in the preview. Facebook stickers are only available on the iPhone and iPad, though anyone can receive the stickers. They will likely come to Android and the desktop website soon.

Not all users will have access to Chat Heads and stickers on the first day, unfortunately. Facebook will roll out the features to all users over the next few weeks. 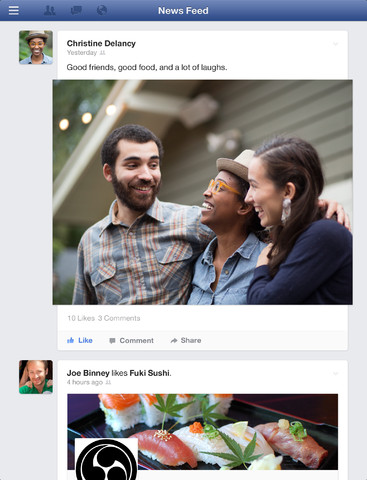 The new version of Facebook also brings along a few changes to the News Feed, which Facebook announced a few weeks ago. The new News Feed is much cleaner than the previous version, especially on the iPad. Both the iPhone and iPhone gain new feeds such as Music, Games and Photos to view in the app which make it easy to just see certain updates on the social network.

The update makes Facebook look more at home on the iPad with larger photos, fewer dividing lines and larger type that’s easier to read at a distance. The new News Feed on the iPad is similar to what it will look like on the desktop when it rolls out to users.